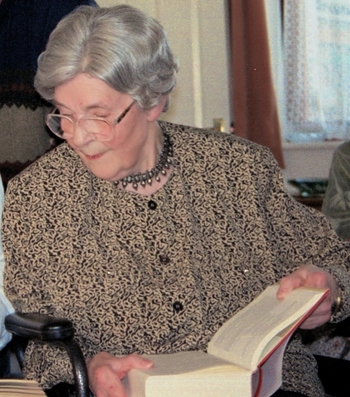 Most of her mystery novels are in one of two series:

Felse Investigates (13 novels, 1951-1978) — Contemporary setting, with policeman George Felse and his son Dominic sharing the limelight (which one gets how much of the limelight varies from novel to novel). Death and The Joyful Woman, the second novel in the series, won an Edgar Award and was adapted into an episode of The Alfred Hitchcock Hour, with Frank Overton as George Felse.

Brother Cadfael (20 novels & 3 short stories, 1977-1994) — Historical (12th century) setting, featuring Brother Cadfael, a former soldier who became a monk in later life and consequently has a more worldly experience and outlook than many of his colleagues. Inspired the 1990s TV series Cadfael, with Derek Jacobi in the title role.

Works by Ellis Peters with their own trope pages include: