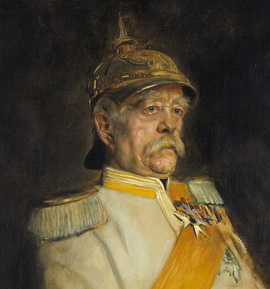 Bismarck had a plan, Bismarck always had a plan.
"Nicht durch Reden und Majoritätsbeschlüsse werden die großen Fragen der Zeit entschieden — das ist der große Fehler von 1848 und 1849 gewesen — sondern durch Eisen und Blut." translation "Not by speeches and votes of the majority are the great questions of time decided — that was the great error of 1848 and 1849 — but by iron and blood."

Born to a land-owning Prussian family — his father was a nobleman, his mother came from a family of (commoner) scholars and public servants, — in 1815, Otto Eduard Leopold von Bismarck (1 April 1815 – 30 July 1898) is most famous for the role he played in unifying Germany and forging it into an economic superpower, thereby creating the German Empire and his Blood and Iron speech, earning himself the nickname the "Iron Chancellor".

Bismarck had a long career in politics, starting as a deputy in his local district (Kreis), then as a member of diets of the provinces of Pomerania and Saxony, where he became known as an arch-conservative and discovered his passion for politics. Bismarck was a Junker, a warrior-caste that eventually came to own most of the agricultural land of Prussia. Revolutions from 1789 to the Revolutions of 1848 included the promise, threat and realization of agrarian reform, and this made Junkers in general, and Bismarck in particular, fiercely counter-revolutionarynote The Chancellor who succeeded Bismarck, Leopold von Caprivi tried to provide some moderate reforms which could have eroded their interests, and he was fiercely opposed by the Junkers who got him kicked out. When the Revolutions broke out, Bismarck apparently tried to raise a militia to defend the King, and he was fiercely opposed to the goals of the Forty-Eighters, including German Unification. He failed to be elected to the Prussian national assembly in 1848 but was elected to the second chamber of the legislature in 1849. In 1851 he was appointed Prussia's representative to the Bundestag (the legislative body of the German Federation), where he prevented a mobilization of the federal army to intervene in the Crimean War, from 1859 on he served as Prussian Ambassador to Russia and then France.

In 1862 he was appointed Minister President of Prussia during the conflict between King Wilhelm I and the legislature over the reform of the army. How Bismarck resolved the situation serves as a excellent example of his political ingenuity: By exploiting a border conflict in Denmark, Bismarck was able to provoke a war against the Danes in 1864, and as he predicted, the war was fairly swift and ended in a clear Prussian victory as Denmark was outmatched both in manpower and technology and not able to rally any allies to their cause. At the same time the war allowed him to paint the liberal politicians in the legislature who had blocked the army reform as unpatriotic for not supporting the army in a time of war, causing them to ultimately roll over and agree to implement the reform. In one fell swoop, he had brought glory and territory to Prussia and successfully subdued his political opponents. During this time, Bismarck began to reconsider his conservative views. He was still a reactionary and anti-democratic aristocrat but he also saw the way the wind was blowing. As such he started coming around to German Unification provided that it was led and carried out by aristocrats and that it could create an autocratic state that nonetheless made the middle-class into its partners against the rising socialist tides (that the Forty-Eighters collapsed when they tried to oppose). The way to deal with it was a complex fusion of domestic and foreign policy, by which internal problems and reforms and the potential precedent it could set for democratization was defused by diverting it first to war, then pragmatic concessions and compromises that fell short of original demand, and which allowed the Prussian military Junker class and their aristocratic friends to continue ruling the way they did. Bismarck was good at foreign policy, not in building peace, but in provoking war and making Prussia look like the defenders against the aggressors. This served him well against Denmark, against Austria, and then definitively in the Franco-Prussian War, against the former hegemon of continental Europe. In 1871, after Wilhelm I crowned himself Emperor of Germany, he promoted Bismarck to Chancellor of the German Empire. It should be said, that while the Chancellor was supposed to be subservient to the Emperor, Bismarck tended to just do what he wanted and the Prussian King acquiesced. Bismarck had achieved the ends he had wanted, but the means he used for achieving it, could not be easily done away with.

The manner of France's defeat (punitive reparations and taking away of territory against the will of the French citizens living therenote which amounts to modern-day Moselle and Alsace, although the latter was conquered in blood by France less than three centuries before) in the Franco-Prussian War was of such a kind that it made long-term peace between the two nations impossible. Bismarck apparently did not want to take the territory but his general staff, namely Moltke the Elder, insisted out of Pangermanism (notably on the basis that people living there spoke various Germanic dialects). He then set about spending the remainder of his career in social and domestic policies while his foreign policies involved trying to form alliances with England, Austria and Russia, to better isolate France. On the domestic front, Bismarck spent much of his time enacting a series of policies to strengthen the state, first against the Catholics (Kulturkampf), then allying with the newly formed Catholic Center party against the socialists, while at the same time passing welfare laws to the surprise and consternation of his conservative allies, namely pension for elderly workers and access to affordable insurance laws (the first of their kind in Europe). Bismarck saw the latter as preferable to the socialist alternative of regulated workspace, safety inspections, and a shorter working-week. Laws proscribing and restricting socialist parties and left-wing parties were on the books, and Bismarck would lean on nativist conservative fears of the other (i.e. the French, the Poles, the Jews) to better strengthen the center and ruling right coalition. His downfall came with the rise to power of Kaiser Wilhelm II. The latter favoured an expansionist foreign policy while expressing opposition to Bismarck's then anti-socialist policies (not out of any sympathy to socialism but merely because he didn't want to appear as a tyrant so early in his career). The fact that Bismarck also made it no secret that he thought the Kaiser's much more overt and rampant anti-Semitism and courting of the country's religious right wing presented a threat to the stability of the realm, also contributed greatly to the falling out between the two. In his retirement, Bismarck spent his time writing his memoirs while giving interviews on how Germany would be ruined and be on the course of disaster without him. The outbreak of World War I, breaking out as Bismarck had predicted over "some damned foolish thing in the Balkans" appeared to have vindicated him.

Opinions about Bismarck remain contentious. Admirers can be found among conservatives (Henry Kissinger) and liberals (John F. Kennedy). They cite his pragmatism, his mastery of foreign policy (it was Bismarck who codified the word Realpolitik) and credit him with building the modern welfare state and the modern military-industry complex. Furthermore, after three short wars to unify Germany and solidify it at the start of his career, he spent the next 20 years supporting peace between European powers. Others however have questioned this view. They point out that Bismarck's aggressive and asymmetrical approach to politics had little room for consensus and compromise.

On the personal level, Bismarck had a detached, almost psychopathic nature. He seemed unable to separate his personal ambitions from the national interest. He had no true loyalty to any cause or person, viewing everyone and everything ultimately as tools to achieve his ends. It was purely by the sheer force of his will and his political genius that he succeeded and survived for so long. It was clear the German government, which he had helped create, was designed to benefit one person above all: himself. On paper, the Kaiser had ultimate control and Bismarck for expediency paid lip-service to this in public, but Bismarck seemed to assume that the Kaiser would always defer to his judgment and that he, the Chancellor, would always be in control. This held true for the first emperor, Kaiser Wilhelm I but when his grandson Wilhelm II, a more dynamic individual, came to power this system fell apart. Bismarck found the new emperor difficult to control. Bismarck offered his resignation to the Kaiser in protest, a tactic he had used previously to get what he wanted. Kaiser Wilhelm II, however, accepted. By this point, Bismarck had double-crossed nearly everybody at least once, and with no support or allies he was effectively booted out of politics completely, leaving Germany completely unprepared to navigate a post-Bismarck world. In his retirement, Bismarck often lamented that Germany was doomed without his guidance. If this was true, it was largely because of his own insistence that he always be there to guide it, rather than constructing a system of government that didn't require a political genius at the helm.

Historians also note that Bismarck's achievements in a large sense were reversed since for a century after his dismissal in 1890, Germany would be partitioned and occupied by rival powers, with the modern Germany having reduced territory with much of its military reduced by neighboring powers thanks to the catastrophic world wars and violence his successors inflicted on the world. Historians oppose any real continuity between Bismarck and Hitler (who did admire the Iron Chancellor) by noting that Bismarck at least supported the appearance of norms and did not openly lie and break treaties the way the latter did. Others note that Bismarck's time in office condoned and enabled the rise of anti-semitic, social darwinist and chauvinist forcesnote (albeit for selfish and pragmatic reasons which he always controlled before it went too far), driven by Appeal to Force and the use of military victory to patch over domestic problems. At the end of his career, Bismarck's Germany became the economic powerhouse of continental Europe with the largest population. A position, despite later turmoil, that it maintains to this day. While many would not credit Bismarck entirely for that, it would certainly not have been possible without the brief but strong unified German state that he created.