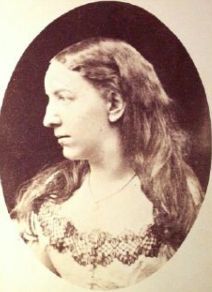 Ouida in 1874, age thirty-five. Photo by Adolphe Beau.
Marie Louise de la Ramée, who wrote under the pen name Ouida (1 January 1839 – 25 January 1908), was an English novelist and essayist. She was extremely prolific and wrote many bestsellers, featuring thinly veiled portraits of high-class society, Tear Jerker tragedies, and thrilling adventure. She always said her main inspiration was Lord Byron. Her style was "aesthetic", considered a type of romance, like her friend Oscar Wilde. Many women, and some men, wrote in this style in Victorian times, but she was "Queen of the Circulating Libraries". Her books sold in the millions, funding her extravagant lifestyle and lush parties. Authors like Wilde, Jack London, Marie Corelli, Sidonie-Gabrielle Colette, Charlotte Perkins Gilman and Marjorie Bowen owe some of their early inspiration to Ouida. London said he credited her book Signa for his own early enthusiasm for reading and literary success.
Advertisement:

Ouida's name sounds like "Ouija", but actually came from the way she pronounced her own name when she was a toddler. Born in Bury St. Edmonds in England, the home of many other Child Prodigies, Ouida may well have written her first novel at sixteen (it was published when she was 24). Homeschooled, mostly by her dad (when he was there), she was an imaginative child, writing plays and enacting them with painted cardboard figures. At 18 she moved with her mother and grandma to London and took up writing for magazines to support them. She was deeply devoted to her family and to animal welfare. Her first confirmed book was Held in Bondage, serialized in newspapers in 1863. You are probably most familiar with her novels Under Two Flags and A Dog of Flanders.

After her mom died she moved to the luxurious Langdon Hotel in London, where she held salons and lavish soirées with big-name guests. She treated her dogs like royalty and expected to be treated the same. She was then earning £3500 a year — about $117,000 in today's money. She worked in bed, writing with a goose-quill pen and violet ink on blue paper, surrounded by flowers and candles, in a bedroom hung with black curtains. She spent upwards of £200 per week on flowers. She collected art and did some of her own painting. She designed her own outfits, and often dressed up as characters from whatever she was currently working on.

Unfortunately, she was not good at managing her finances, and when her books fell out of copyright she lost her main source of income. She continued to write, but ended her days in dire poverty in Viareggio, Italy. Most of the money she did have went to her one-woman dog and horse rescue. She helped start the Italian Society for the Prevention of Cruelty to Animals. Marie Corelli visited her and wrote a heartrending essay about her dire state. Published in the Daily Mail, it pissed Ouida off considerably, but also helped to start a charitable fund to help her out. She is buried in Bagni di Lucca and her stone tomb has an effigy of her with a little dog at her feet. The Langdon Hotel has a rewards program

named for her. A fountain for animals in her home town bears her name.

Some of Ouida's books can be read for free at the Online Books Page.

Works by Ouida contain examples of: