Literature / A Dog of Flanders 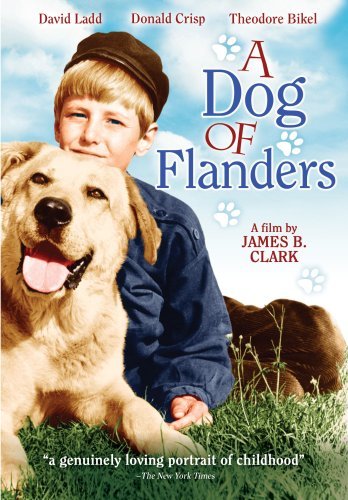 A Dog of Flanders is a 19th century children's novel, written by British author Ouida in 1872. It's the dramatic tale of a young Flemish boy, Nello, and his dog Patrasche.
Advertisement:

Nello is a poor kid who becomes an orphan at the age of two when his mother dies in the Ardennes. His grandfather, Jehan Daas, takes him in, and Nello moves to a small village near Antwerp. One day, Nello finds a dog who was almost beaten to death and names him Patrasche. The animal recovers and proves his usefulness by helping Nello deliver milk to his grandfather's clients. Nello then falls in love with Aloise, daughter of Nicholas Cogez, a rich man in the village. He doesn't want his daughter to be seen with a pauper, so Nello tries to earn some money by entering a junior drawing contest.

Then, things turn out for the worse. He loses the contest, Nicholas accuses him of pyromania, and his grandfather dies, so he loses his place to stay. Nello and Patrasche wander lonely and sadly through the streets while the snow of Christmas Eve covers the landscape. Nello and his dog pass by the Cathedral of Antwerp and, since the boy admires painter Peter Paul Rubens, he wants to see his famous painting "The Elevation of the Cross". Again tragedy strikes, because he has no money to pay for the entrance fee. So he leaves and later returns and discovers the church door is open. He enters and is able to see the painting with his own eyes. Next morning Nello and Patrasche are found, frozen to death in front of the painting.

Despite taking place in Belgium, the story was barely known in the country itself (the novel wasn't translated into Dutch until 1967). It is also largely forgotten in the UK. But in Japan, the book is a classic and a clear example of Germans Love David Hasselhoff. Countless Japanese children have read and cried over the sad tale of Nello and his dog. In fact: a large part of Japanese tourism to Antwerp is caused by this tale. Much of the popularity is due to the various anime adaptations of the story, including a 52-episode anime as a part of the Nippon Animation World Masterpiece Theater series in 1975, and a separate 26-episode series by TMS Entertainment, My Patrasche, in 1992. Nippon Animation remade the story as an anime film in 1997; only the movie is available officially in English.