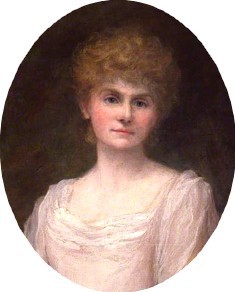 was a Christian mystic/spiritualist and the author of many Victorian fantasy-romances and adventure stories, including A Romance of Two Worlds and Ardath. Some of her books featured reincarnation, astral projection and other occult themes, quite normal for that speculative era. Like H. Rider Haggard (who was a fan of hers, and she of him) and Edward Bulwer-Lytton, she seemed to have been influenced by the Rosicrucians and the Society for Psychic Research. But much of her writing on these matters was purely original. Like Bulwer-Lytton, she was taken seriously by Theosophy and by today's New Age. Her stories often had strong Aesops about the hypocrisy of society, unfairness towards women and children, and cold rationality without compassion or spirituality.
Advertisement:

Born Mary Ann Mackay on May 1, 1855, Marie was the daughter of Elizabeth Mills, a maidservant in the home of Charles Mackay who wrote Extraordinary Popular Delusions and the Madness of Crowds. She spent her childhood in England and was educated in Paris. Mackay called himself her stepfather and legally adopted her. She may have been his birth daughter, in which case she was illegitimate. She later took pains to cover up her parentage and background. She said her real father was an Italian who had died before her birth. Her stage / writing name Corelli came from him. She would say she had either been born in Venice or went to school there, although she never really learned Italian outside of her music education — one thing she wasn't good at was languages. She credited her real father with having introduced her to the Rosicrucians through some material he left her, and later she may have been a member of AMORC

She first came to attention as an improvisational pianist, which meant she was immensely proficient in keyboard work. She could make up a whole sonata or symphony in her head and play it while planning it. (Today we associate this more with jazz.) She had a brief career as a professional singer, but her voice wasn't strong enough and constant performing put her under too much stress.

She was thirty-one when she published her first novel, which was an immediate wild success. She made a fortune off her books and public appearances, investing it in a home called Mason Croft in Stratford-upon-Avon, the home of William Shakespeare. She was a great fan of the Bard, collecting and preserving many artifacts of his life and work. She devoted substantial money and energy to restoring the buildings that had been around in Shakespeare's time. Today, Mason Croft is the home of the Shakespeare Institute.

Marie was either a Lesbian or (more likely) had a very strong Pseudo-Romantic Friendship with her housemate Bertha Vyver. Something had happened early in her life to put her off the idea of men and marriage in the ordinary sense. She looked much younger than her actual age, and ensured that she continued to do so even in her advanced years by careful effects in dress and makeup, plus working with her photographers to ensure her publicity stills were retouched.

Like her friend Ouida, Marie could be difficult in person, but she was capable of great kindnesses and self-sacrifice. She was the sole support of her brother Eric, who failed miserably at every career he attempted. Instead of being grateful, he got nasty and went around saying he wrote most of her books, reminding society that as Marie was stepping out of bounds as far as the proper role for a Victorian woman, she was "unsexed" and therefore mentally ill. Her revenge was the novel The Murder of Delicia, a polemic on the social control of women in all its forms.

She wrote of the right of persons to advance according to their talents and not to be trapped by social class and expectations. She believed in universal health care and women's right to vote. She wrote of drug addiction in Wormwood, alcoholism in Holy Orders, illegitimacy in Innocent, Cram School and child suicide in The Mighty Atom, internal combustion engines in The Devil's Motornote this didn't stop her from buying a Daimler, the benefits of atomic energy in The Secret Power, and adapted the Faust legend in The Sorrows of Satan, which was made into a film.

When she discovered Ouida living in dire poverty in Italy trying to run a dog and horse rescue on pennies, Marie published a passionate open letter in the London Daily Mail. Ouida was right pissed by the invasion of her privacy, but the letter did help to start a fund for her and her Canine Companions.

Today, Marie Corelli is becoming recognized as an important contributor to English literature

. She addressed many of the same issues as Virginia Woolf and Henry James, and is noted for her willingness to experiment rather than sticking to a formula.