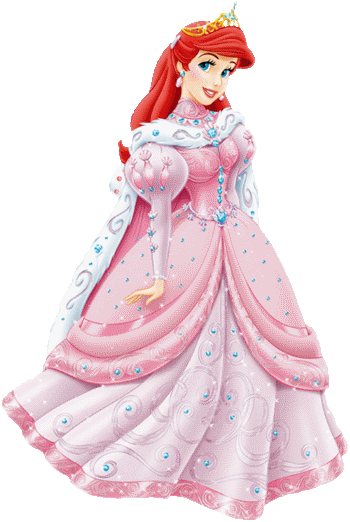 Think just looking at this dress

◊ is impressive? Try describing it.well...  "Ariel wore a new holiday dress similar to the pink dress she wore for Eric when she first walked on land but had a pink satin cape that was edged with white fox fur for the Danish winter. The fur was studded with silver filigree alternating with brilliant-cut aquamarines. The cape was held closed with a pink scallop shell with additional embedded aquamarines. The jewel motif repeated in a cascade down the center front of her bodice with even more jewels sprinkled over her seashell pink overdress and dusty rose pink underdress. Her puffed sleeves, also dusty rose, each had three slashes that revealed soft pink fabric underneath, with small seashells nestled like buttons at the top of the slits and jewels resting on the bottom. There were three rosettes cascading down the lower sleeve that ended at the wrist with a flourish of pearl, and her creamy throat was shown off with a high collar of lavender satin, with dusty rose scrollwork echoing the waves of the ocean. Her tiara was..."
Advertisement:
I wanted to do a valentine to Hollywood ... This was done through sets, costumes, hair, and makeup. Everything was exaggerated. Shoulder pads were an inch bigger inside, and the ties were made even wider. Giorgio Armani said that he studied the costumes and decided to make clothes, "like New York, New York".
— Martin Scorsese, Martin Scorsese: A Journey, Page 102-103, explaining the appeal of the trope and its influence on fashion.

This trope is about extremely detailed clothing, either seeing it or describing it. Seems to be more as a form of Author Appeal or Fanservice than for any important details to the plot. Seems to be most common in stuff aimed at girls and women.

This trope is usually written, but if the clothing is elaborate enough, it can be shown visually. This was especially true when royalty invokes the Ermine Cape Effect, or in period drama films from The Golden Age of Hollywood. With both, the point was in the fanciest, flashiest clothing possible.