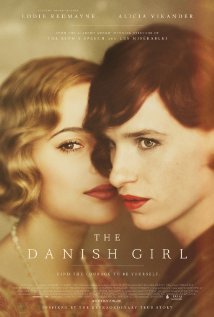 "I think Lili's thoughts, I dream her dreams. She was always there."
—Lili Elbe
Advertisement:

A 2000 novel by David Ebershoff, The Danish Girl is based on the life of Lili Elbe, one of the first known recipients of sex-reassignment surgery (also known as gender affirmation or gender confirmation surgery). A film version, directed by Tom Hooper and starring Eddie Redmayne and Alicia Vikander, was released in 2015 after spending over a decade in Development Hell.

In 1926, Lili (then presenting as male) and her wife, Gerda, were accomplished painters in Copenhagen. One day, Gerda asks Lili to stand in for their mutual friend, Ulla, who was supposed to model for her latest painting but canceled her appointment. After trying on women's clothing, Lili realizes that she is transgender. Gerda doesn't know what to make of her "husband"'s changes at first. But eventually, she stands by Lili as she undergoes sex-reassignment surgery.