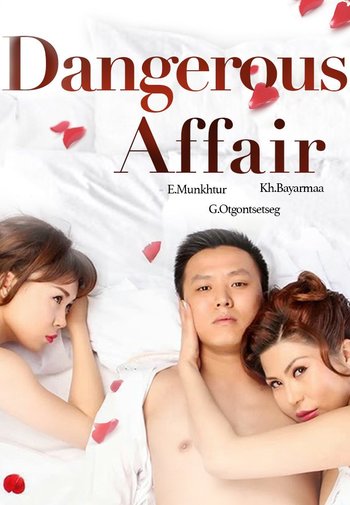 Dangerous Affair is a 2015 film from Mongolia directed by Ts. Khuselbaatar.

The story, which may be a tiny little bit similar to Fatal Attraction, revolves around Munkh (E. Munkhtur), a young attorney. Munkh has a pretty wife, Tselmeg. Together they have a five-year-old son named Uuldeg, and Tselmeg is pregnant with their second child.

So naturally Munkh goes out and has a fling. At a party he takes notice of Tuul, a businesswoman and more importantly a curvaceous temptress (Kh. Bayarmaa). By chance he meets her again when someone's blocked his car in the parking lot and she gives him a ride. She hires him for some legal work, which leads to dinner as Tselmeg is off visiting her father for the weekend. That leads to a night of hot sex over at Tuul's place.

In the morning they agree to part amicably, and they never see each other again—no, just kidding, of course that doesn't happen. Tselmeg is back in town from her weekend with her father, but Tuul calls Munkh up, he tells his wife that he has to work late at the office, and he and Tuul have a second night of wild sex. Unfortunately for Munkh however, Tuul wants more, and when Munkh finally tells her in no uncertain terms that he's married and they can't fool around anymore, she refuses to go quietly.