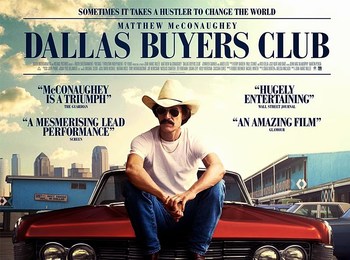 "What? Hook me up to the morphine drip... let me fade on out? Nah. Sorry, lady, but I prefer to die with my boots on."
— Ron Woodroof
Advertisement:

Dallas Buyers Club is a 2013 drama starring Matthew McConaughey, Jared Leto, and Jennifer Garner. It was directed by Jean-Marc Vallée.

The film is based on the true story of Ron Woodroof (McConaughey), an electrician and rodeo fan who discovers in 1985 that he has HIV when a workplace accident lands him in the hospital. After learning that the trial drug AZT, which he had been taking to treat himself, was ineffective, Woodroof begins smuggling unapproved drugs, first from Mexico and then further afield. With the help of Rayon (Leto), an HIV-positive transgender woman, Woodroof establishes the Dallas Buyers Club, dealing in drugs to help HIV-AIDS sufferers. Though Woodroof is opposed by the FDA, who attempt to shut down his operation, he finds support from Eve Saks (Garner), a doctor at a local hospital participating in the AZT trial. Saks witnesses first hand the attempts by pharmaceutical reps to get the drug FDA-approved and on the market, despite signs that the drug is proving ineffective in treating her patients while causing significant, severe side effects.

Screenwriter Craig Borten got the idea for the film after meeting the real Woodroof all the way back in 1992, but the project languished in Development Hell for over a decade, stars from Dennis Hopper to Brad Pitt going in and out of the process. McConaughey took the lead role in part because he shared Woodroof's same working-class Texas background, and his performance picked up critical acclaim (the film being a particularly epic Career Resurrection) alongside the work by Leto. They received the Academy Award for Best Actor and for Best Supporting Actor, respectively, making this only the fifth movie ever to win both awards.