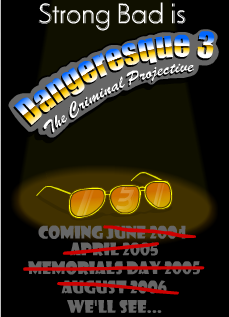 ultimately.
"Fundamentally, what went wrong was that the system was delayed, delayed, and delayed further, until finally it was delayed again, and subsequently delayed, before its final delay happened, before its eventual delayed release."
— Technology Connections, on the RCA CED Videodisk format.
Advertisement:

The state where an announced creative project becomes stuck at the creation stage for years.

The term originates in the film industry, referring to films mired in pre-production without casting or production ever beginning. A common occurrence with book adaptations and other licensed materials, as legal squabbles over rights, Executive Meddling, budgetary problems, and differing artistic visions keep the project from going before the cameras. And even if it does make it to the shooting stage, a Troubled Production can easily derail it and throw it right back here.

Films stuck in Development Hell are called Vaporfilm. The Video Game equivalent of this is Vaporware.

Development Hell becomes a sort of self-reinforcing feedback loop over time—as one director gets fed up and quits, the project is assigned to a new director, who orders a new screenplay with a new vision, which results in producers demanding changes, wash, rinse, repeat etc. Projects in other media can sink into similar cesspits. Sometimes examples of this trope lead into cases of What Could Have Been or Trailer Delay. If the team behind the medium is frustrated enough, it can result in Implementing the Incomplete.

The Shelf of Movie Languishment is a variation where a finished work gets stuck in release limbo.

Compare to Extremely Lengthy Creation, where a work did take a long time to come to fruition, but with no problems involved.

For those examples which finally became real, after years, or decades in some cases, look at Saved from Development Hell.

The Other Wiki has an entry

If you're looking for a breather from this page, we suggest visiting Development Heaven.