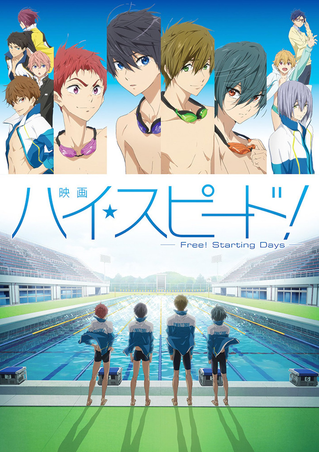 From left to right: Asahi, Haruka, Makoto, and Ikuya.
A prequel to Free!, adapted from the second Light Novel of High☆Speed! (2013), produced by Kyoto Animation and Animation Do. Unlike the show, the movie was not directed by Hiroko Utsumi, who left Animation Do shortly after the second season finished. Instead the film was directed by Kyoto Animation veteran Yasuhiro Takemoto, who is known for directing Full Metal Panic!, Lucky Star, Hyouka, and Amagi Brilliant Park, and the screenplay was written by Maiko Nishioka, a writer on Nichijou, Hyouka, Free! Eternal Summer, and Amagi Brilliant Park.
Advertisement:

This film takes place when Haruka Nanase and Makoto Tachibana enter middle school, shortly after winning their first relay with Nagisa Hazuki and Rin Matsuoka, and after Rin has left for Australia. Both enter into their school's swimming club, alongside new friends Asahi Shiina and Ikuya Kirishima. The four are assigned together as a medley team by their captain Natsuya Kirishima, Ikuya's elder brother, and are watched over by the club manager Nao Serizawa. Practice goes underway, but middle school is different from elementary, and tensions rise among the group as everyone struggles with their new environment. Each boy has their own personal baggage bringing them down, affecting their performance. What does it mean to become a team?