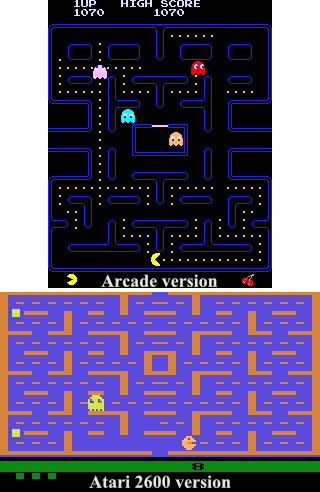 In six weeks, Atari turned Pac-Man Fever into Pac-Man Cancer.
"Actual game shots taken from a version you haven't bought."
— Only You Can Save Mankind
Advertisement:

Porting a program to another system is seldom an easy task. If you had the good fortune to be able to consistently use cross-platform libraries while writing the original program, you might be able to get away without having to do any code rewriting. Otherwise, you're looking at significant rewrites ahead. Multi-Platform development can help avoid this, but if the developers are rushed, the version for the system with which they're least-familiar will likely suffer.

To qualify the program as a Porting Disaster, one or more of the following major points has to be present:

Also, keep in mind that "ports" for earlier systems may not be technically considered as ports but rather as conversions. Video game hardware of the late seventies to the mid-nineties tend to differ dramatically from one platform to another, and while that may still hold true with today's consoles, the lack of cross-platform libraries, platform-specific behaviour (the Atari 2600's video hardware was vastly different compared to the ones on the NES and arcade systems) and the generally low-level nature of programming then would account for at least some disasters.

Contrast Polished Port, where a game is greatly improved during the development of a ported version and Arcade-Perfect Port, where a ported arcade game appears identical from source arcade to destination console/computer.

Also related is "consolitis"; a game is designed for both PC and consoles, and suffers in the eyes of PC gamers who are used to the greater capabilities of high-end PCs. This is especially evident in franchises that began as PC games, but later installments expanded their markets; as a result, the sequel will be noticeably less refined gameplay than its predecessor.

For the movie and animation equivalent of this, see Digital Destruction.

Please only add examples of games that contain game-breaking bugs or are broken to the point of unplayability, not minor glitches or annoyances.