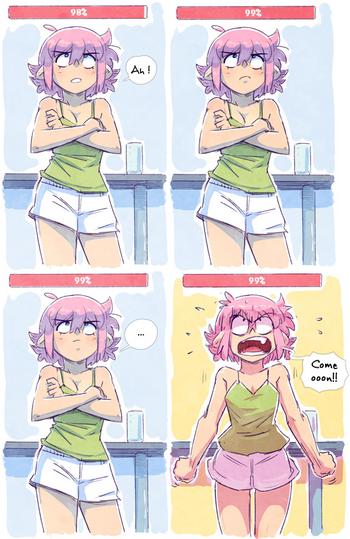 LOADING CAPTION...
"If cartridges were still popular, this game would have finished loading by now."note Ironically, this game was later ported to the cartridge-based Nintendo Switch, but only digitally aside from a small print from Limited Run Games. The message was removed in that version.
— Message on a loading screen, Yooka-Laylee
Advertisement:

"Whensoever games are loaded off disk, whether that be a floppy, a hard drive, or some kind of Blu-ray thing, there will be games that take longer to load than to play."

Ah, Loading Screens. How we loathe them, and yet how common they are. However, those aren't the subject of this trope — this trope is about games that take too damn long to load, and do so not just at startup, but the entire time you're playing.

This is something of a cyclic trope because of technology changes. Computer gamers of the 1980s learned to loathe the slow-as-molasses tape and floppy disk drives of the era, and cheered when they were replaced by the much faster hard disks. But it didn't take too long for games to take advantage of increasing disk size and grow so big that they took as long to load from the hard disk as their ancestors did from floppies. Solid-state cartridges from the old days had fast random access times that some cases matched or exceeded RAM, leading to near-instantaneous load times, but because solid-state memory costs a lot more than optical disc-based data storage even today, most game cartridges tend to be fairly limited in data capacity (if you thought $60 for a 32-gigabyte Nintendo Switch game was greedy, wait until you see the cost of a 1-terabyte microSD cardnote as of the end of 2020, those can go for upwards of $250 per unit, sometimes even more). Thus, it becomes tempting to compress data for modern cartridge games to make them fit in the limited space, and since most game consoles have equally limited RAM (since that also requires pricy solid-state technology), it can take a long time to uncompress that data. So it goes...

It can help when hard drives grow larger. This not only allows them to store more of the game's data, which will usually load faster from the hard drive than from an optical disc, but also allows them to use uncompressed storage, which takes a lot less work from the CPU to load. However, on an optical drive, compressed data can be faster to load and decompress than uncompressed data...so it's a double-edged sword on weaker systems.

Load times for cartridge-programmed games are an extremely complicated issue. Cartridges work, in theory, by allowing the system to access data near-instantly (as fast as electricity can travel through the solid-state ROM chips used to store the game data). Though some consoles like the N64 used slow rom which means that the CPU didn't have access to the ROM directly: It can only stream items that don't require fast memory, like sound or animation and load everything else in RAM. The problem is that solid-state memory is not nearly as fast as dynamic RAM (except for the NES, SNES, TurboGrafx-16, and GBA), so most of the time, the CPU can't work with it - it has to run off of program code stored in RAM. Moving data from solid-state to RAM takes time, and while it's not nearly as bad as long disc-based load times, it can add up... especially on the GBA, which has cartridges storing up to 32 megabytes (Mother 3), for a system that only has 256 kilobytes of RAM. Decompression times can also bottle neck graphics

No relation to The Load, though that may be what you call games suffering from this. Point of advice: bring a book for some of these, preferably a thick one you can put

down quickly. See also Dynamic Loading, when loading sequences are performed "behind the scenes" and (hopefully) go unnoticed by the player.

This was less of a problem on Xbox 360 and PlayStation 3 onwards, as they work by installing from the disc to the hard drive— once that's done, the disc is only used for checking that you own the game. For about a decade that was the only advancement... then the PlayStation 5 and the Xbox Series X|S arrived, which both utilize Solid State Drives to their fullest potential for lightning-fast load times: certain games can have practically instant loads of levels that would previously take 30 seconds or more. Time will tell how much this will proliferate to other platforms like PC and handhelds, but for now the 9th Generation consoles are reaping the benefits (and making the games that don't take advantage stand out even more).

Jon awaits the Star Wars chess pieces to get into place.

Jon awaits the Star Wars chess pieces to get into place.