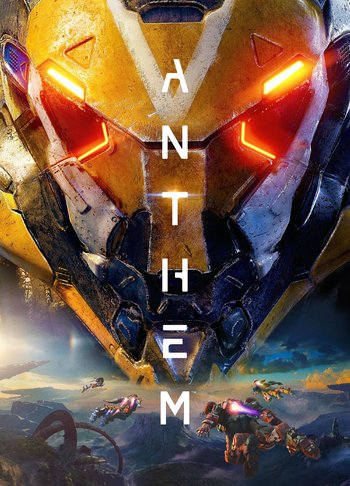 Out there, you either live with the choices you make... Or you die trying to change them.
"The gods vanished... And left our world in chaos. Creating. Altering. Destroying. The Anthem is all that remains."
— The Freelancer

Anthem is an open-world, Third-Person Shooter/Action RPG released on February 22, 2019, developed by BioWare and published by Electronic Arts.

The planet of Coda is a deadly place. Legends state that the gods abandoned it half-created, leaving behind the force they used, the Anthem of Creation, and the tools they used to control it. The power of the Anthem occasionally breaks free in Cataclysms, reshaping the land, creating dangerous new species, or even altering the laws of physics themselves. Humanity struggles to survive in this place, protected by walls and soldiers using Powered Armor called javelins. The ones who most frequently leave the walls and stop the Cataclysms are the Freelancers, a group of benevolent mercenaries sworn to protect humanity.

The plot follows a rookie Freelancer, one of the few survivors of a failed attempt to stop an abnormally powerful Cataclysm called the Heart of Rage. They settle in a city called Fort Tarsis two years after the disaster, struggling to find work in a world that has lost faith in Freelancers. But they soon discover that the Heart of Rage had a specific cause, and now need to fight to stop a plot that could destroy the entire world...

that they would be ceasing development on any future Anthem content to focus on Dragon Age, Mass Effect, and Star Wars: The Old Republic.