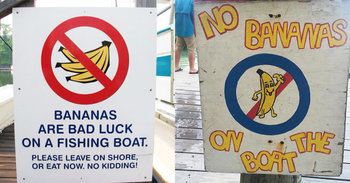 Some rules are just plain bananas.
"Do you not know, ma'am, that your mariner is the most superstitious soul that ever breathed?"
— Desolation Island
Advertisement:

Sailors have long had a reputation for being extremely superstitious, likely due to the mercurial nature of the sea: When you're completely surrounded by empty ocean, with the ship as your only source of supply and shelter, a single bad circumstance can easily turn catastrophic. As a result, any practices thought to bring good luck and/or avoid misfortune would find easy acceptance. Bringing a woman on deck can be considered terrible luck, as well as throwing rocks at seagulls, watching the land as you leave port, or any manner of other things.

This is usually Played for Laughs, but can be Played for Drama if someone gets hurt.

See Nautical Folklore for the most common of these superstitions.