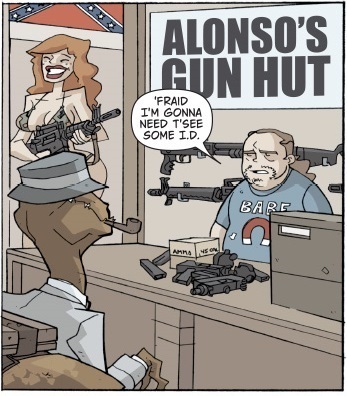 "How'd a dinosaur get guns!?"
"In a perfectly legal manner is how!"
Advertisement:

Some characters, probably unusual ones, are participating in wacky hijinks on their way through the town and decide that they need to go shopping for something, be it mundane, supernatural or just plain crazy. They bust into the store, acting and looking absolutely and completely out of place (and most probably also being totally obnoxious). They get weird looks sent their way, some people sneak out just in case, most customers are stunned with the sheer audacity of the scene.

Cue the Super-Stoic Shopkeeper. He/she will pay absolutely no heed to the hijinks, serve the customers in a composed and orderly fashion, maybe suggest a thing or two the characters might also want, ask whether they prefer to pay with cash or a credit card and basically do anything else they would do for a regular customer.

This happens because perhaps this is a regular occurrence to the shopkeeper, or they've Seen It All and it'd be really hard to surprise them, or maybe they're an Almighty Janitor or someone had them Reassigned to Antarctica. Or maybe they're a disaffected teen who just can't be bothered to care. For whatever reason, anyone and everyone is just a regular customer in their eyes and has to be treated accordingly.

In a video game, they're likely to put up with anything short of shoplifting or attempting to get a Ballistic Discount, at which point they will rain down all hell upon you.

Shopkeepers might not care about who the customer is; see No Hero Discount.

Subtrope of The Stoic and of the Shopkeeper. Compare Bunny-Ears Lawyer and Apathetic Clerk. Related to Unusually Uninteresting Sight.