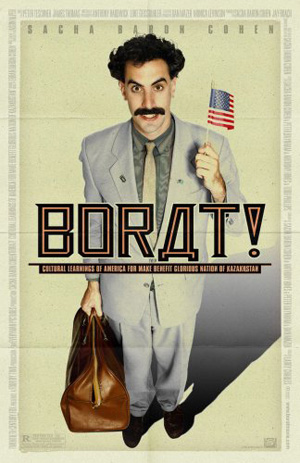 "Jagshemash! My name Borat! I like you. I like sex. Is nice!"
— First lines of the movie, and also the least offensive thing you'll hear him say
Advertisement:

Borat: Cultural Learnings of America for Make Benefit Glorious Nation of Kazakhstan is a Black Comedy Mockumentary that centers around Borat Sagdiyev (Sacha Baron Cohen, in one of his guerrilla commentary-style characters), a humble reporter from Kazakhstan and a racist, antisemitic, misogynistic stranger to American culture, who travels around the United States with his manager Azamat (Ken Davitian) to learn about its culture.

His odyssey — which includes stops in such diverse places as New York City, Washington, D.C., a live Morning Show, a Virginia rodeo (where Borat attempts to sing the national anthem with his own lyrics), a confederate antique shop, a Jewish couple's bed and breakfast, a born-again Christian revival tent service — ends up being framed by his final destination in California, where he plans to find and wed Pamela Anderson, having grown completely enamored with her after catching an episode of Baywatch on TV.

It is worth noting that a) the director and both producers — including Baron Cohen — are Jewish, and b) most of the other people featured in the film were completely unaware of their ultimate role in the resulting movie. (In fact, the movie contains only 4 actors: Baron Cohen, Ken Davitian, Luenell and Pamela Anderson herself.) Controversy followed the film for many of the above-mentioned reasons, including lawsuits brought by many of the subjects of Borat's attention. It has been banned in all Arab countries save Lebanon, and Russia has discouraged cinemas there from showing it.

The government of Kazakhstan was none-too-pleased with it either, due to all the "No, we're not really racist homophobic Ruritanians" phone calls their foreign relations department had to deal with. Despite this, the film has a cult following in the republic, helped by the First Daughter Dariga Nazarbayeva, who told their government to lighten up and enjoy the joke, and other government officials who appreciated its treatment of a rare subject. Reportedly, it's done wonders for their tourism sectornote But be warned: Kazakhstan does not, in fact, have the world's greatest potassium production.

Despite the large number of lawsuits and controversies, Borat, originally expected to flop, was a great success in terms of critical, financial, and cultural impact. It spawned a 2009 Spiritual Successor Brüno (2009), starring another of Baron Cohen's characters. In fall 2020, a sequel was confirmed to have been completed

; it was eventually released in late October of that year through Prime Video under the name Borat Subsequent Moviefilm: Delivery of Prodigious Bribe to American Regime for Make Benefit Once Glorious Nation of Kazakhstan.