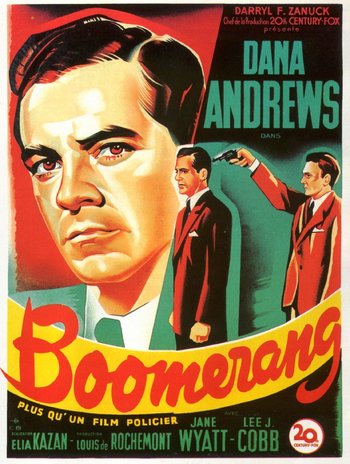 The primary duty of a lawyer exercising the office of public prosecutor is not to convict, but to see that justice is done.
—The Lawyers' Code of Ethics
Advertisement:

The film takes place in Stamford, Connecticut, an average American town reeling from the grisly murder of a kind and popular priest. The police force, led by Chief Robinson (Cobb), have seven witnesses to the murder but not one clue to lead them to the killer. Facing public and media pressure, the police force scoops up a likely suspect, John Waldron (Arthur Kennedy), an ex-serviceman and vagrant with unlawful possession of a gun, and district attorney Henry Harvey (Andrews) assumes it's an easy conviction. But a deeper analysis of the facts makes this case more complicated than Harvey initially thought.

Not to be confused with the similarly named Eddie Murphy film.