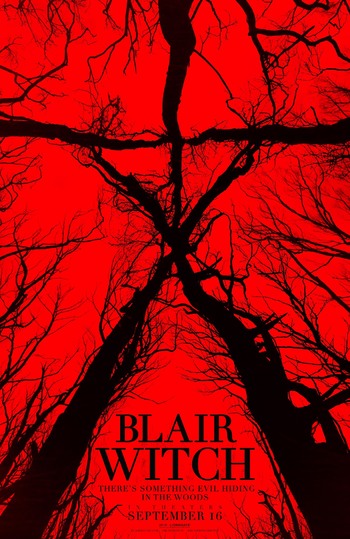 I'll be watching you...
“I think it was the UPM (unit production manager), he was talking to one of the producers,” recalls Wingard. “He said, ‘This script is really cool but it seems like a real knock-off of The Blair Witch.’ It was like, ‘Oh, wait, you haven’t actually gotten the real script? We should get that to you.’”
— Adam Wingard, Entertainment Weekly article

Blair Witch is a 2016 horror movie, written by Simon Barrett and directed by Adam Wingard (of You're Next and The Guest fame) and a direct sequel to The Blair Witch Project. Two decades after the disappearance of student filmmaker Heather Donahue, new footage is found in the woods of Burkittsville, Maryland and posted online. A new group, led by Heather's brother James, head into the infamous woods with two local guides and the benefits of modern technology in the hopes that Heather might still be alive after all this time. Things ultimately take a turn for the worse.

But it didn't start out that way, at least not to the general public. People at San Diego Comic-Con 2016 came in to the first public showing of the mysterious and anticipated movie The Woods...and came out having watched the first new Blair Witch movie in sixteen years.

If the original The Blair Witch Project was best known for its Viral Marketing campaign, what Blair Witch might be best known for is the amount of secrecy it went through before its reveal. During its production as The Woods, only select members of the production staff and the main cast had the real script during the filming, everyone involved had to sign a non-disclosure agreement, and even most people at the distributor, Lionsgate, had no clue of the true nature of the film. Promotion for the film was done as The Woods with a "switch" being done during the SDCC screening itself with the social media account names and IMDB details being changed. Even the giant sign

in the lobby of the Comic-Con screening was changed from The Woods to Blair Witch branding while the film was still rolling. What resulted was one of the most unexpected horror movie revivals in years.