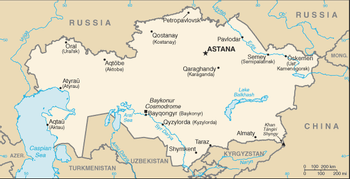 Kazakhstan (Kazakh: Қазақстан, Qazaqstan; Russian: Казахстан, Kazakhstan), officially known as the Republic of Kazakhstan (Kazakh: Қазақстан Республикасы, Qazaqstan Respublikasy; Russian: Республика Казахстан, Respublika Kazakhstan), is a huge Eastern European and Central Asian country — bigger than all of Western Europe put together, and the ninth largest country in the world overall. It is pretty sparsely populated, though, with an average density of less than 15 people per square mile. This is because the country is mostly located in the Great Eurasian Steppe, a region excellent for pastoralism but poor for farming.

The vast majority of Kazakhstan lies in Asia, but a small corner in the west is on the western bank of the Ural river, putting it in Europe. This is very important for Kazakhs, as it entitles the country to participate in European projects, receive European Union funding and enter its football team in the more prestigious European leagues. Culturally, however, it is unmistakeably Central Asian.

During most of its history the land that is now Kazakhstan has been inhabited by nomadic tribes. Many tribes that invaded Europe, namely Scythians, Huns and Mongols, passed through its steppes first, leaving their mark on the genetic and cultural portrait of the local populace. By the 15th century, the majority of modern Kazakhstan was inhabited by nomadic tribes who spoke a Turkic language with some Persian and Mongolian influences. To this day Kazakhs are Sunni Muslims of the Hanafi school of Jurisprudence. Kazakhstan was once ruled by an aristocracy that consisted almost entirely of Genghis Khan's patrilinear descendants. There were very few cities and they were mostly concentrated in the south, where there were fewer nomads. Some of these cities (e.g. Turkestan, Taraz and Shymkent) still exist.

The Kazakh nation was born in the mid-15th century, after several tribes led by Janibek Khan and Kerey Khan protested against the allegedly unjust rule of Abu'l-Khayr Khan and his Khanate of nomadic Uzbeks (only partially related to modern Uzbeks). These tribes seceded from his Khanate, left his territory, and formed their own Khanate, which was divided into three Hordes — Greater, Middle and Lesser. The Kazakhs fought a long war against Abu'l-Khayr and his heirs, and eventually succeeded in conquering most of northern Central Asia and driving the Uzbeks to the south. However, the "federal government" of the Khanate was unable to reign in the three Hordes and for most of its existence the Hordes were de facto independent.

In the 17th century the Kazakh lands were invaded repeatedly by Dzungars from the east. The Kazakhs took heavy losses, so the ruler of the Lesser Horde, Abul Khair Khan (no relation to the aforementioned Uzbek Khan), proposed a defense deal with Tsarist Russia. The Russians, falsely believing that Abul Khair represented all Kazakhs and Kyrgyz, construed his request as a plea to join the Empire. They almost immediately set about taking control of the Lesser Horde and by the 1820s all three Hordes were under their control. In the documents of the time Kazakhs are referred to by Russians as the "Kirghiz-Kaisaks", or just "Kirghiz" for short, while the actual Kyrgyz were dubbed "Kara-Kirghiz", or "the Black Kyrgyz". The imperial days for Kazakhstan were characterized by intensive construction of forts and towns, settlement by Russian and Ukrainian peasants and Cossacks, as well as occasional native rebellions, caused by land disputes, taxation and (during World War I) conscription.

After Red October, Alash-Orda, a secular nationalist party, tried to organize a national government, but they were opposed both by local Bolshevik sympathizers and Russian monarchists, most of whom were Cossacks. Eventually Kazakhstan became part of Soviet Russia, and later, in 1936, a Soviet republic. Major events in Kazakhstan during Josef Stalin's rule included collectivization, which resulted in a massive famine around the same time as Ukraine's Holodomor, construction of major gulag camps, as well as the evacuation of many people and factories from European Russia to Kazakhstan during World War II. Some of these factories remained, contributing to the industrialization of this formerly agricultural country. Also, around the middle of the 20th century huge deposits of fossil fuels, metals and other mineral resources were discovered in the country. From then on Kazakhs boast that their land contains all the elements of the periodic table (and no, not just potassium).

During Nikita Khrushchev's time, Kazakhstan was the subject of the infamous "Virgin Lands" campaign, in which Moscow encouraged Russians, Ukrainians and other Soviet peoples to emigrate to large empty areas such as the steppes of Kazakhstan and start farming them. In fact, by independence, immigrants outnumbered Kazakhs — though most of the Russians left afterwards. Nevertheless, ethnic Russians still comprise about 20% of the population, and the percentage of people whose primary language is Russian could be anywhere up to half the population. That number would include nearly all Ukrainians, Jews, Germans and Koreans, most of whom lost their respective languages, as well as a large number of urban Kazakhs.

Kazakhstan was also the site of much of the USSR's nuclear and space programs, with the Baikonur Cosmodrome being perhaps the best known. The Semipalatinsk Nuclear Test Site is still an unsafe area and there are still many children born near there with genetic disorders. Another major environmental disaster the Soviets caused was the gradual shrinking of the Aral Sea

— because Moscow decided that the arid regions of Uzbekistan and southern Kazakhstan should become regions for growing cotton, cereal, melons and rice

, Amu Darya and Syr Darya, the two rivers that flow into the Aral Sea, were diverted for irrigation. As a result, the amount of water reaching the sea dropped with every successive year. This development was even encouraged by some Soviet officials, who claimed that the Aral Sea had to disappear for the sake of progress, because it was "nature's error". Not only did this destroy the region's traditional fishing industry, it also caused major dust storms, as the salt from the exposed bottom of the sea was seized by the wind.

After the breakup of the Soviet Union, Kazakhstan found itself as one of the world's largest nuclear powers by way of its missile stockpile. They quickly boxed them up and sent them back to Russia. However, as part of the agreement by which Russia would still be allowed to use Baikonur (at a rent cost disputed to this day), the Kazakhs were given their Buran space shuttles — which were promptly left to rust away. Despite the massive environmental impact of Baikonur, the Semipalatinsk Nuclear Test Site and the Aral Sea, as well as the social impact of the population transfers, several major gulag camps, destruction of the traditional nomadic lifestyle, and the pervasive neglect of Kazakh-language education in Soviet times, most Kazakhs hold no grudges against the Russians and have a neutral-to-positive view of their Soviet past. This is due in part to the pivotal Soviet role in the formation of a national entity which was based along the Kazakh ethnic group, along with the region's first literacy and industrialization programs (mirroring those that appeared elsewhere in Soviet Central Asia), alongside the promotion of the first ethnically-Kazakh politicians to the highest seats of government since the region's annexation by the Romanov Monarchy, like Saktagan Baishev (before the Soviet period, all leaders were ethnic Slavs appointed by the Imperial court).

Ultimately, Kazakhstan was the last Soviet Republic to secede from the Union on December 16, 1991. Until 2022, it was led by Nursultan Nazarbayev, whose internal authoritarian policies, tolerance of widespread corruption and rampant election fraud in every election ever held, made him resemble a less Ax-Crazy Saparmurat Niyazov. Unlike the isolationist Niyazov, Nazarbayev was at least smart enough to maintain good relations with the United States and Russia, and he did not indulge in any of Niyazov's attention-grabbing, crazy antics like building a golden statue of himself, renaming the months of the calendar, or banning opera and video games. Though he stepped down as President in 2019, he remained the chairman of the Security Council, seen to be the real power behind the country, and the capital city, Astana, was also renamed after him. However, the president Nazarbayev handpicked to succeed him, Kassym-Jomart Tokayev, has been steadily accumulating power and undermining his predecessor's authority. This culminated in 2022, when Tokayev sacked Nazarbayev from his position amidst protests over fuel price hikes, thus ending the longest de facto reign of any post-Soviet autocrat.

Despite the administrative inefficiency, corruption and usual social issues that accompanied the post-Soviet period (poverty and the like), Kazakhstan's economy has grown more or less steadily since, largely due to its natural reserves and oil exports, though it did take a big hit from the 2008-2009 global economic unpleasantness. The government has also taken successful steps towards restoring its side of the Aral Sea, unlike Uzbekistan.

On a more positive note, Kazakhstan has one of the biggest cycling teams in the world, Team Astana. Astana was established by local cycling star Alexandre Vinokourov, who has won grand tours, major classics and the Olympics. If you watch a big cycling event, expect to see this team. Kazakhstan is also believed to be where horses were first domesticated by humans in around 3500 BC, and where apples originated from, with it's largest city, Almaty, originally being called Almatau, meaning Apple Mountain, and nicknamed the "Apple City" and "Big Apple" (no relation to New York City).

The official languages of the country are Kazakh and Russian, the latter being used more during Soviet times due to the Virgin Lands campaign, though awareness of the former language is slowly being made in recent years. Kazakh is a member of the Kipchak subgroup of the Turkic languages and is closely related to the other "northerly" Turkic languages like Kyrgyz, Volga Tatar, and Bashkir. If there is one thing that Borat got right, it is the fact that Kazakh is currently written in the Cyrillic Alphabet (but not of the faux type); it was additionally written in the Arabic script during pre-Russian times (and still is in China), and Latin during the Russian Civil War-era. Kazakhstan is officially planning to return the language to Latin letters in the 2020s. note Current Kazakh Cyrillc may suit the language well, but has too much keys for a computer keyboard, especially one of a notebook with no numpad, while the new script will presumably use basic Latin with cedillas, umlauts, breves, and tildes on some letters. By the way, if you are curious how real-life Kazakhs look like, they

◊-looking, which might be a surprise to people unaware of the East Asian origins of the Turkic peoples.

The sky-blue field symbolizes the Turkic peoples and their unity; at the center is a yellow sun, the source of energy, whose 32 rays are shaped like ears of grain, symbolizing abundance; below the sun is a soaring Steppe Eagle