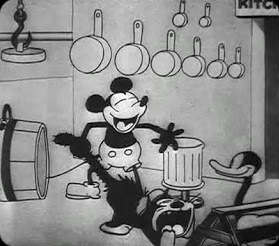 It's telling that Furry Confusion is the least wrong thing with this scene.
Miwa: Let me get this straight. April gave you a cat, and not even five minutes into owning her, you got her mutated her into... this?
Michelangelo: Uh yes.
Miwa: Well, at least now Donnie has his retro-mutagen guinea pig.
— Same Difference, "Earthquakes, Portals, and Worms, Oh My! Part 1"
Advertisement:

This may lead to a Dude, Not Funny! moment if other characters in the work are disgusted by another character joking about animal cruelty. However, it's slightly less disturbing if the abused animal is sapient and a Jerkass who gets a karmic punishment at the hand of the abuser.

Compare Bad People Abuse Animals and Amusing Injuries. Also related to That Poor Cat, which is a comedic Stock Sound Effect of an animal in distress (most often a cat yowling in fear or pain). The oblivious version is And Call Him "George"!. A subtrope of Black Comedy and a form of Comedic Sociopathy. Can often manifest as Black Comedy Pet Death and Instant Fish Kill.

For instances where one animal abuses other animal, it only counts as this trope when the abuser is higher on the Sliding Scale of Anthropomorphism than the victim, but not when the two animals are equally anthropomorphic.

The Nerd takes out his rage for the Ecco the Dolphin games on Ecco himself, pulling him out of the TV just to beat him.

The Nerd takes out his rage for the Ecco the Dolphin games on Ecco himself, pulling him out of the TV just to beat him.