Film / That Touch of Mink 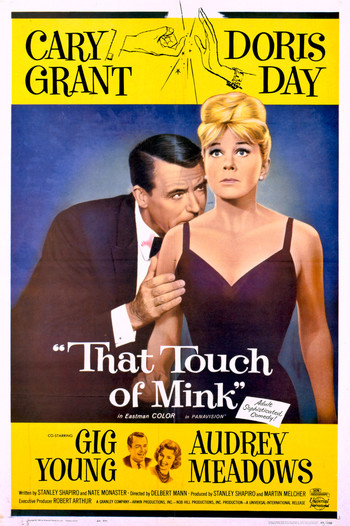 That Touch of Mink is a 1962 American romantic comedy film directed by Delbert Mann, starring Cary Grant and Doris Day.

Cathy Timberlake (Day), a New York City career woman, meets womanizing executive Philip Shayne (Grant) after his Rolls Royce splashes her dress with mud while she is on her way to a job interview. Philip proposes a romantic affair, while Cathy is holding out for marriage, but Philip is insistent. Watching from the sidelines are Philip's financial manager, Roger (Gig Young), who sees a therapist because he feels guilty about helping his boss with his numerous conquests; Cathy's snarky roommate, Connie Emerson (Audrey Meadows), who knows all too well just what Philip is seeking; and sleazy unemployment clerk Everett Beasley (John Astin), who's got his own designs on Cathy.