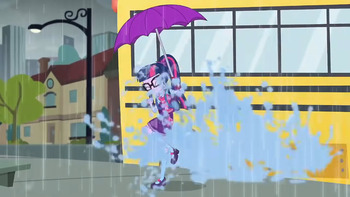 A character is walking along the road when a car drives past through a puddle, splashing them big-style with water. Usually used as a comedic device which adds insult to injury in the events of an already bad day, perhaps after the character wonders how it could get any worse. Often the number one cause of Doomed New Clothes, especially fancy, expensive clothes. May lead to a Wardrobe Wound.
Advertisement:

As you might expect and as several unfortunate saps can attest to, this is Truth in Television. However, Do Not Try This at Home — in many jurisdictions, deliberately (or even accidentally if you were driving inattentively or too fast and could have easily avoided creating too much of a splash.) driving through puddles to soak pedestrians can get you cited under "driving without due care for other road users" statutes. There have also been cases where people have lost their jobs for doing this in the company vehicle. People have also sued for causing shock, though there are some who think that if the victim was able to quickly jot down or memorize the car's license plate, they weren't shocked enough to be able to sue.