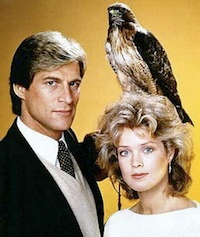 Dr. Chase and Police Detective Brooke Mackenzie.
Dr. Jonathan Chase, wealthy, young and handsome. A man with the brightest of futures, a man with the darkest of pasts.
—Our hero summed up in the Opening Narration
Manimal is one of several So Bad, It's Good series on NBC that seemed to rule the television schedule back in The '80s. Each of them had an aggressively silly science fiction / fantasy premise as the setup for its story arc. In this case, there's this man named Dr. Jonathan Chase (Simon MacCorkindale) who is implicitly (according to the opening credits; it doesn't look like they ever elaborated on this) the latest in a long line of people able to turn into animals. He teams up with average police officer Brooke Mackenzie (Melody Andersonnote arguably best known as Dale Arden in Flash Gordon (1980)) and They Fight Crime!.
Advertisement:

Today, the series is mostly remembered for being the most notorious of NBC's infamous "No-Hitter" year of 1983 (none of the shows that premiered on the Peacock Network that year lasted a full season), for frequently appearing in the form of all-day marathons on the Sci Fi Channel some years ago, and for — of course — that hilarious title. On the other hand, it was also an early job for special make-up effects guru Rick Baker and the transformation sequences were done by Stan Winston.

Championed by legendary NBC executive Brandon Tartikoff, this went down as a notorious failure for him in a career otherwise riddled with smash successes - he would always display a Manimal poster in his office to keep him humble ever after.

In 2012, it was announced that Sony Animation plans to make a live action/CGI film of the series.