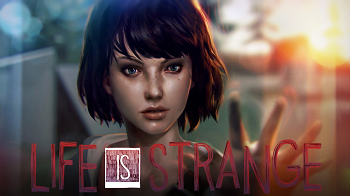 Life Is Strange is a 2015 episodic Adventure Game and the first entry in the Life Is Strange franchise. It was developed by DONTNOD Entertainment and published by Square Enix.

It's October 2013, and Maxine "Max" Caulfield (Hannah Telle) is an 18-year-old High School senior who just recently moved back to her hometown of Arcadia Bay, Oregon, after an absence of five years. When she sees a girl get shot by a fellow student, Max discovers she can rewind time, allowing her to change what happened and save the girl. The girl is later revealed to be Chloe Price (Ashly Burch), Max's former best friend, and the two have a rather strange but heartfelt reunion.

As Chloe and Max try to patch their rusted friendship, and figure out how the other has changed in their mutual absence, Max learns of Rachel Amber, a former Blackwell Academy student who disappeared six months ago under mysterious circumstances after meeting someone who allegedly "changed her life". Chloe, who had formed a strong bond with Rachel after Chloe's father died and Max moved away, is desperate to find her. In an effort to try and reconnect with her old friend, Max decides to help Chloe look for Rachel. At the same time, Chloe and Max try to investigate the ramifications of Max's new power, spurred by Max's recurring visions of a tornado wiping out the town in four days.

This new power comes in handy with the other major difficulty in Max's life: Arcadia Bay. Coming back after five years of total absence is difficult enough, and Max's social life is made complex by her choice of high school: Blackwell, an elite institution to which Max has a full ride scholarship, studying photography. The town and school are filled with a diverse cast of characters, all of whom have their own secrets and agendas. Max must not only do her best to help Chloe find the missing Rachel, whom everybody seems to know, she must navigate the treacherous waters of personal relationships with the people around her, and not all of them have good intentions at heart.

Focusing primarily on the relationship between Max and Chloe as the world goes wrong around them, Life Is Strange is an emotional, story-driven game that offers a twist on the typical adventure game: Max's ability to rewind time. This power allows her (and thus the player) to explore the immediate outcome of choices and dialog options, then rewind to test other possibilities, even creating new ones using information gained from previous interactions. It creates an interesting in-universe form of Save Scumming for our heroine. Max must make choices that will deeply affect herself and those around her, and seemingly small or insignificant decisions can have a huge impact down the line. With time running out and the tornado looming, will Max's choices save Arcadia Bay, or doom it?

Season 1 consists of five episodes, which were released roughly eight weeks apart throughout 2015. It is available for download on iOS, PlayStation 3, PlayStation 4, Xbox 360, Xbox One, Mac, Linux, and PC (the last three through Steam), and you can download the entire first episode for free to try it out if you're on the fence

. It's available for disc retail (with an optional limited edition) only on the PlayStation 4, Xbox One, and PC. The limited edition featured the game's licensed soundtrack on CD, a 32-page art book in the style of Max's journal, and a director's commentary which was released to all players. You can find launch trailers, developer videos, and other such context at the official YouTube channel.

A remastered version was released in 2022 as part of the Life Is Strange Remastered Collection.

For other not-as-related-but-still-tangentially-related works, check out the franchise page.

Beware! Due to the choice-based nature of the game, there are many spoilers. Proceed with caution!

When David rescues Max, Jefferson ends up either restrained with his own duct tape or murdered while he's helpless, in the very same room he's been doing the same to several young women (and was about to do to Max). If David doesn't kill him, Max can take it a step further and photograph him in this pitiful state.

Example of:
A Taste of Their Own Medicine

When David rescues Max, Jefferson ends up either restrained with his own duct tape or murdered while he's helpless, in the very same room he's been doing the same to several young women (and was about to do to Max). If David doesn't kill him, Max can take it a step further and photograph him in this pitiful state.