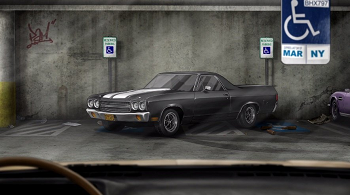 In popular media, one of the quickest and easiest ways to establish a character as a Jerkass is to have them (knowingly) park their car in a spot reserved for disabled people. If they're caught doing so and called out for it, the offender will refuse to apologize, either because they just enjoy inconveniencing others, or because they feel entitled to the space simply because they found it first.

Subtrope of Kick the Dog. Compare Parking Payback, when this kind of behavior is met with immediate retribution.