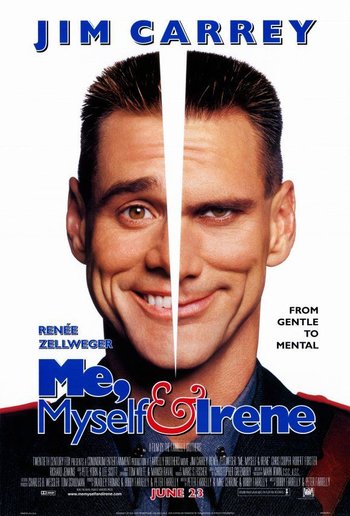 Me, Myself & Irene is a 2000 film directed by the Farrelly Brothers, starring Jim Carrey and Renée Zellweger.

Immediately after Rhode Island State Police trooper Charlie Baileygates (Carrey) marries his sweetheart Layla (Traylor Howard), she begins having an affair with the driver of their wedding limo (hey, we did say "immediately") when she learns that he is an accomplished academic who is only driving a limo as a research project. The affair continues for years, even producing children which Charlie accepts as his own, until Layla ultimately leaves Charlie.

Traumatized by Layla's betrayal, Charlie spends the next few years avoiding confrontation and allowing others to take advantage of him. Everyone in town, apart from his foul-mouthed genius sons, treats him with contempt.

Charlie's repressed anger develops into a rude and violent Split Personality named "Hank Evans". Complications arise when Charlie is tasked with escorting a woman named Irene P. Waters (Zellweger) to Massena, New York, and Hank is both help and hindrance as Charlie and Irene try to stay alive while being pursued by both the FBI and a pair of crooked cops (Chris Cooper and Richard Jenkins) working for Irene’s mobster ex-boyfriend Dickie (Daniel Greene), who seeks to silence her because She Knows Too Much.