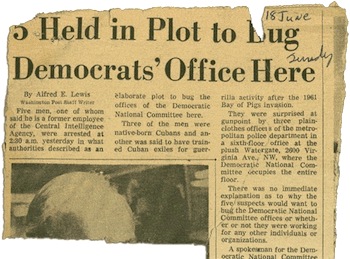 Just a burglary at the Watergate Hotel.

Someone investigates a minor crime, or possibly something as major as murder, but finds something much bigger going on behind it. The first crime might be part of a Revealing Cover-Up, or it might be just a Red Herring; it can also be both the cause and effect of Crime After Crime. This is extremely common in crime fighting action films where the plot is more about building up a lead in from normal life and confronting the big secret; in other fiction there might be all manner of twists, turns and dead ends before it all links up. This is a staple of the detective variety of Film Noir.

Works in which several different crimes are committed (e.g. a Police Procedural TV series) sometimes follow the pattern that every Minor Crime reveals a Major Plot — the main characters can't investigate any crime, big or small, without stumbling upon an Evil Plan involving several different people and six- or seven-digit sums of money. This is largely an Acceptable Break From Reality: of course, in Real Life, thousands of crimes are committed each day without any sort of plan or conspiracy behind them — burglars sneak into homes to steal some small cash, people are killed when petty arguments get out of hand, dastardly villains cross streets in illegal ways to get to the other side faster — but it makes for a more interesting story to have your master detectives slowly uncover the villainous plot of a Diabolical Mastermind than to have them book random mugger after random mugger.

Contrast Infraction Distraction, where a minor crime is committed to conceal a greater one.

Truth in Television. Real Life professional criminals will bend over backwards to make sure they don't trip up over something minor because it's happened before. The best way to avoid capture is to not attract attention — at all. However, many criminals do not maintain professional standards and are caught for things like not paying fare on the subway, or expired license plates. It's given rise to the expression "Only break one law at a time".

As this is a trope about plots, many of the examples will contain spoilers. You have been warned. When it's the criminal who only intended to commit a minor crime, it's Unintentionally Notorious Crime.

Not to be confused with Wanted Meter. Compare Working the Same Case, where two or more seemingly unconnected cases turn out to be connected to the same plot.