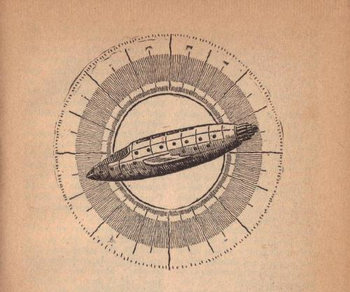 The main reveal of the book. It's the emblem of the Galactic Empire... and a Periphery leader has it on his bodyguards' blasters.
TRADERS-... With psychohistoric inevitability. economic control of the Foundation grew. The traders grew rich; and with riches came power....
It is sometimes forgotten that Hober Mallow began life as an ordinary trader. It is never forgotten that he ended it as the first of the Merchant Princes....
— ENCYCLOPEDIA GALACTICA, 116th edition, published in 1020 F.E.
Advertisement:

Jorane Sutt, the mayor's secretary, and Hober Mallow, Master Trader from Smyrno, are having a discussion about a neighboring galactic nation, the Republic of Korell. Three spaceships from the Foundation have been lost in their territory. The government can't ask about what happened without appearing weak, and since they sent only routine reports before their disappearance, the government assumes that Korell has obtained nuclear weapons. Mallow's duty is to enter Korell as a normal Trader, but to find out where the Korellian government is obtaining nuclear weapons.

Later that night, each meets with a friend to explain how they were acting two-faced in the previous meeting. Both agree that a Seldon Crisis is occurring, despite Mallow treating it like a political buttress. Secretary Sutt believes that the Traders are a threat to the dominance of Terminus in the Foundation, and is afraid of losing the religious hold on the Four Kingdoms. Master Trader Mallow and his fellow Traders, on the other hand, are chafing under the oppressive rule where their political concerns aren't being represented. This internal conflict, combined with the possibility of an external military strong enough to challenge the Foundation, points to a Seldon Crisis, because if they don't handle it exactly as Seldon predicted, the Foundation will collapse.

Mallow invites his friend, the retired Trader Jaim Twer, along with him for the mission. Once in the capital planet of Korell, the ship plays a waiting game, wondering when the government will meet with Mallow. After a week of sitting idle in the spaceport, a Foundation priest boards the ship, begging for sanctuary. Naturally, everyone aboard is quite sympathetic, but Mallow, Captain of the vessel, points out that the missionary is in violation of Foundation Law as well as Korellian law. When a mob (which includes one small-town policeman) comes for the priest, Mallow has no choice but to let them take Revered Jord Parma.

However, this turns out to have been a Secret Test of Character; half an hour after letting the mob have the priest, Mallow receives an invitation to meet with Commdor Asper, the man in charge of the entire Republic. Mallow makes his initial sales pitch, and everything goes smoothly. After several demonstrations and a fancy dinner thrown in honour of the new trade agreements, he notices that the bodyguards for Commdor Asper have weapons with the Spaceship-and-Sun symbol of the fallen Empire on them. Shortly thereafter, he gives his crew instructions on what to do for two months, while he's investigating more details on his own.

Trader Mallow heads to the planet Siwenna. Once there, he learns about what's happened to the Empire in the hundred-fifty years since Terminus has lost contact with them. Nuclear power is still technically around, but nobody is able to repair it once it malfunctions. After a certain amount of disrepair, power plants simply shut down, and learning their routine maintenance is either a military secret or a hereditary job. Mallow doesn't stay long once he's confirmed this and the fact that Commdor Asper of Korell is married to a daughter of an Imperial Viceroy. They're definitely trading with each other, which means the Empire is the source of nuclear power.

A few months after Mallow returns to Terminus, however, he's accused of murdering a Foundation priest by letting a mob tear him to shreds. However, Master Trader Hober Mallow has anticipated their threats and evidence, and has prepared for that in turn. He capitalizes on his skyrocketing popularity to become Mayor of Terminus, and then reveals that he's also been preparing for Korell declaring war upon the Foundation with nuclear warships. But just like he anticipated the murder trial, he's figured out a way to win the war already.

"The Merchant Princes" was reprinted in Foundation (1951), the compilation of the first four stories. It was also republished in Science Fiction Classic Stories From The Golden Age Of Science Fiction (1989). Not to be mistaken for The Merchant Princes Series, an Alternate History series about a family of dimension-hopping traders by Charles Stross.

"The Merchant Princes" provides examples of:

"[N]uclear power can be conquered only by more nuclear power."
— Jorane Sutt

Alternative Title(s): The Big And The Little