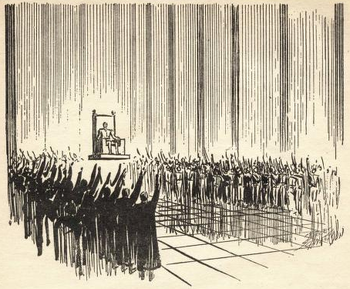 Ruler by divine right, King Lepold in his floating throne at court.
THE FOUR KINGDOMS— The name given to those portions of the Province of Anacreon which broke away from the First Empire in the early years of the Foundational Era to form independent and short-lived kingdoms. The largest and most powerful of these was Anacreon itself which in area...
— ENCYCLOPEDIA GALACTICA, 116th edition, published in 1020 F.E.
Advertisement:

Mayor Salvor Hardin, and his advisor, Yohan Lee, have an appointment with Sef Sermak and three of his notable supporters. They represent a population of Terminus that is dissatisfied with the Foundation's sycophantic appeasement of the Four Kingdoms. They believe that Terminus needs to become a military power so that it can defend itself against aggression by the Four Kingdoms. Mayor Hardin gives a superficial explanation of why setting the kingdoms against each other has provided an equilibrium. Unpersuaded, Sermak argues that Terminus needs to strike now, before one kingdom becomes powerful enough to conquer Terminus and the other three kingdoms. After Sermak and his associates are dismissed, Lee scolds Hardin for keeping too many secrets, since he knows Hardin has a plan to keep Terminus safe, but he hasn't revealed what it is.

Mayor Hardin's next appointment is with High Priest (and ambassador) Poly Verisof who snuck onto Terminus through the expedient of taking off his robes and travelling like an average citizen. He provides Mayor Hardin (and the audience) with the Back Story. Hardin has given the Four Kingdoms their technology, disguised as a religion, of which he is the chief priest and Terminus is the holy city. Priests run nuclear reactors all over the Four Kingdoms, and everything is explained to them as holy manifestations of the "Galactic Spirit". The kings of the Four Kingdoms willingly accepted this religion, since with it came legitimacy through the Divine Right of Kings, and it has been zealously adopted by the general public. The strongest of these kingdoms is Anacreon, ruled by the teenage King Lepold, who will come of age in February. For now, his uncle, the Prince Regent Wienis is in charge. The royal family enjoys hunting for sport, although the previous king died in a Hunting "Accident". A suspicious accident. The two discuss what Seldon must have been planning, and Hardin admits that he's figured out that one of the key parts to psychohistory was that the people whose actions are being predicted can't know what the prediction is. Mayor Hardin reveals his plan to be on Anacreon when they decide to attack.

The next scene change shows us events on Anacreon, and the dynamics between uncle and nephew. Prince Regent Wienis explains why Terminus is dangerous to Anacreon, and why it is important that they conquer it. At this point, the stage is set for why Terminus is facing internal conflict and a military threat from Anacreon.

Hardin arrives to Anacreon just in time to attend the ceremony where Lepold will be crowned as King due to his majority, and Wienis invites him to a private meeting. While Wienis initially tries to tempt Hardin, in the end he reveals that he has sent the Anacreon fleet to attack Terminus: much to Wienis' surprise, Hardin is relatively unfazed. When the Regent demands to know why, Hardin tells him that he gave the order, weeks ago, to put Anacreon under interdict: at midnight, all the power plants in the planet will be shut down, depriving all of Anacreon (save for the temples) of electricity - and the priests have started to tell the population about the attack, which is considered sacrilege.

The shutdown happens as expected, and Wienis attempts to force Hardin to order the restoration of power, pointing out that the fleet is still traveling, but Hardin has also planned for the possibility: aboard the Anacreon Fleet's flagship (an old Imperial battlecruiser that was repaired by the Foundation's engineers), its priests do the same thing as in Anacreon, turning the ship and the fleet against Wienis, ordering that the Prince Regent be arrested and put under trial. When these news are received at Anacreon, Wienis unsuccessfully attempts to murder Hardin, before choosing to kill himself.

The real power of the Foundation now proven, Hardin manages to wrangle the Four Kingdoms into new treaties that give the Foundation much more power over them than ever, securing the Four Kingdoms. When he finally arrives back on Terminus, he witnesses the second hologram Hari Seldon created, which indicates that the strategy Hardin used was the expected, but there is also a warning that the Foundation will not be able to use this power forever and that they must find ways to get on top of everything.

"The Mayors" provides examples of: