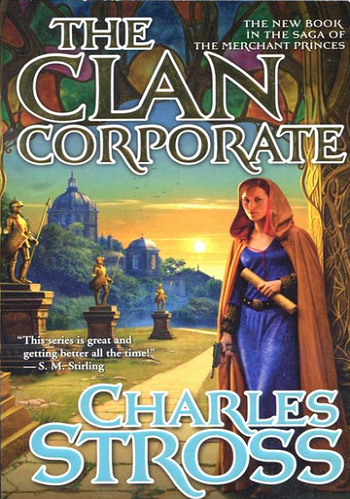 A Fantasy series by Charles Stross, about a journalist named Miriam Beckstein who finds an Alternate Universe stuck in Medieval Stasis where her long-lost family are powerful traders who can travel between dimensions. The series was originally planned as four very long books, but the publisher got cold feet about the length of the books and insisted they be broken up into multiple volumes. As a result, the overall story is now split into two sub-series with a big Time Skip in the middle.
Advertisement:

In 2014, these were collected into three omnibus volumes named The Bloodline Feud, The Traders War, and The Revolution Trade, with some minor changes to the text.

The "next generation" series occurs after an approximately 20-year time skip and consists of three books:

Not to be mistaken for "The Merchant Princes", part of The Foundation Trilogy, by Isaac Asimov.