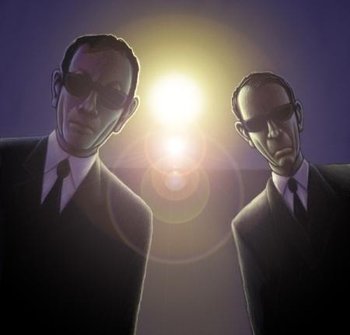 "You didn't see anything."
"You'll dress only in attire specially sanctioned by MIB special services. You'll conform to the identity we give you, eat where we tell you, live where we tell you. From now on you'll have no identifying marks of any kind. You'll not stand out in any way. Your entire image is crafted to leave no lasting memory with anyone you encounter. You are a rumor, recognizable only as déjà vu and dismissed just as quickly. You don't exist. You were never even born. Anonymity is your name; silence, your native tongue. You're no longer part of the System. You're above the System. Over it. Beyond it. We're 'them'. We're 'they'. We are the Men in Black."
— Zed, Men in Black
Advertisement:

Black suit. White shirt. Black tie. Sinister Shades. Ominous and overbearing manner. Speaking in code. No indication of emotions or a personality. Ostensibly some kind of covert operative, but very conspicuous. They are simultaneously imposing and nondescript, which fits their mission perfectly.

The Men In Black are the generic intimidating agents. If they have names, expect them to be along the lines of an obvious pseudonym, one of the most common Anglo-Saxon names (although they're often described as being very racially ambiguous), such as "Mr. Smith", "Mr. Jones", "Mr. Brown", etc., or else they'll be Mister Strangenoun. They're there to loom over you and make you feel afraid, whether they're sent by The Government, The Mafia, a Corrupt Corporate Executive, or aliens from outer space. They're almost never there to help you - and if they are, you probably won't like their methods.

Generally, they're in the business of keeping secrets. Laser-Guided Amnesia is a pretty common tool in their arsenal, especially in more idealistic versions, wiping out a memory you're probably better off without so you can go back to a normal life. More cynical portrayals just bully you into keeping your mouth shut. Or just make you disappear, one way or another. Less often, they'll make An Offer You Can't Refuse: join or forget. Or die.

Conspiracy Theorists live in fear of the Men In Black. They know too much.

Despite being the symbolic presence of The Oppression Of The Man, The Men in Black have the mystique of being badass and cool, so heroes can be associated with them. In those cases they are merely protecting panicky Muggles by doing what's ultimately best. Watch out for Conspiracy Redemption if they go too far, though.

The Men In Black tend to have access to vast material resources through their inclusion in budgets that never appear on the public books. They often have new super-secret weapons and devices and are in constant contact with Mission Control via Obligatory Earpiece Touch. If The Men in Black are hunting a character, he should look over his shoulder for the Van in Black and scan the skies for the Black Helicopters. Finally, The Men in Black frequently do not officially exist, so good luck finding out anything about them.

The term comes from fringe UFO research, where the Men In Black have become the primary boogeymen. The earliest citation comes from 1953: UFO researcher Albert Bender, who published a small newsletter called "Space Review", explained a missed issue (which he had promised would blow the lid off the secrecy about UFOs) by claiming that "three men wearing dark suits" had approached him and ordered him "emphatically" to stop publishing material about flying saucers. Years later, he would admit that he just didn't have the promised material and made up the story to explain why, but not before milking the story with a 1963 book called Flying Saucers and the Three Men In Black, and spawning an entire mythology.

Or maybe that's what they told him to say...

Usually male, Distaff Counterparts are somewhat uncommon. May employ (or have a division that is) a Creature-Hunter Organization to keep Muggles from discovering monsters from The Masquerade, and are also frequently associated with Artifact Collection Agencies.

Compare with Secret Police. See also the Men in Black franchise, named after and based upon this trope.

Not to be confused with a single Man in Black, or Black Shirt, or the related but distinct trope Evil Wears Black.

Majestic is a shadowy government agency that investigates the Furon invasion.

Majestic is a shadowy government agency that investigates the Furon invasion.