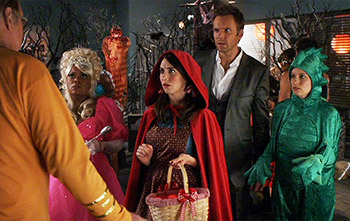 There's a Halloween party going on in the Greendale "Liscary" and all of the study group are there: Jeff is dressed as David Beckham (complete with stubble and a soccer ball); Britta is dressed as a dragon-turtle ("I'M A T-REX!"); Annie is dressed as Red Riding Hood; Pierce is dressed as Captain Kirk; Shirley is not dressed as Miss Piggy; and Troy and Abed are dressed as Ripley in the Power Loader and the Alien Queen respectively.

Pierce eats some of the "taco meat" that Dean Pelton bought at an army surplus store and exhibits some strange symptoms, including fever and slurred speech. Soon, he bites Starburns and the infection spreads — resulting in a full blown Zombie Apocalypse. And to make matters worse, the Dean locks them in the library to wait six hours for the army to arrive.