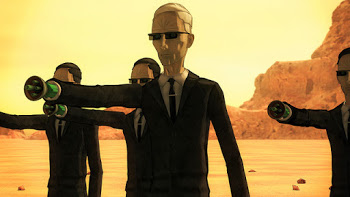 Doctor Who meets The Men in Black.
"Oh, come on. I thought the fifties were supposed to be a time for optimism. I mean, you think you're going to have flying cars in another ten years."
— The Doctor
Advertisement:

The one that's not animated in Flash!

A CGI-animated Doctor Who miniseries. Set between "The Waters of Mars" and "The End of Time", during the gap where the Doctor is running from his death.

The Doctor breezes into a Greasy Spoon in 1950s New Mexico, in search of some quality junk food. Behind the counter of this one is Georgia Moffett, sporting a surprisingly good American accent; in front of the counter is Jimmy Stalkingwolf, a Stereotypical Native American; and on the counter is a weird glowy thing, left over from a flying saucer crash a few years ago.

This should end well.

Within minutes, they've been spotted by a Viperox battle drone, nearly captured by a Man in Black, and then really captured by Colonel Stark and the rest of The Army, and taken to Area 51, a.k.a. Dreamland, a.k.a. the Secret Government Warehouse full of cool alien stuff.

Less cool and more horrible is an actual alien, a live one, being held prisoner in the Elaborate Underground Base ever since her spaceship crashed several years before. Our Heroes don't get a chance to do much more than wave at her before they're bustled off to have their memories wiped, but the Doctor makes a mental note on his to-do list.

So once they've escaped, Jimmy Stalkingwolf takes them to see his grandpa, Night Eagle, only to get captured by The Men in Black — actually Robots in Black — and get saved by Night Eagle and his buddies, who take out the robots using bows and arrows, of all things. Night Eagle and friends are keeping another alien, of the same race as the Army's, in hiding. He's the husband of the first one, the one being kept prisoner in Dreamland, and he knows that the cool glowy thing in Cassie's diner isn't benign: it's a genocide bomb.