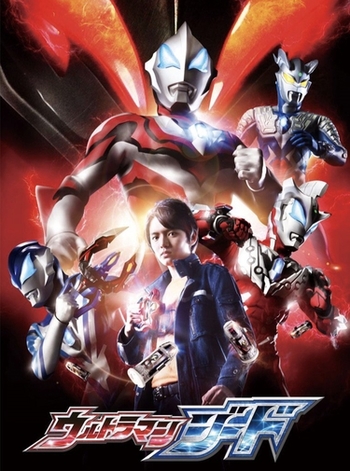 Fate – prepare to decide.
"Sitting around and doing nothing won't get us anywhere!"
— Riku Asakura's catchphrase
Advertisement:

Ultraman Geed is an 2017 tokusatsu series created by Tsuburaya Productions, and the 29th entry in the Ultra Series and a direct sequel to Ultra Fight Orb showing us the adventures of the Ultra that debuted in The Stinger. It was simulcasted by Crunchyroll.

Long ago, a lone Ultraman succumbed to temptation and attempted to steal power from the sun-like Plasma Spark, putting the very existence of all Ultramen in peril. He was exiled from the Land of Light and corrupted by evil forces, becoming the Fallen Hero Ultraman Belial. Throughout history, Belial has arisen time and time again to threaten the peace of the universe, most notably clashing with the heroic Ultraman Zero.

During his latest uprising against the Ultramen, Belial was able to occupy the Earth and detonate a dimensional bomb that destroyed the universe itself. Yet the universe was revived by an unknown power, and life on Earth continued as before, with the Ultramen who opposed Belial fading into rumour and memory over the following years.

Riku Asakura is an innocent young man who believed himself to be an ordinary human. But when a giant monster suddenly attacks his home city, he discovers that his blood contains the "B Factor" that marks him as a "son" of Ultraman Belial. Disregarding his bloodstained legacy, Riku learns to combine his own strength with the "Ultra Capsules" containing the powers of his Ultraman predecessors, fusing them together and becoming the heroic giant known as Ultraman Geed.

Riku soon finds out the monsters are targeting humans who carry "Little Stars" within their bodies, granting them supernatural powers. With the aid of mysterious swordswoman Raiha Toba; his best friend Pega; Woman In Black (and childhood friend) Moa Aizaki; and Reito Igaguri, an ordinary office worker who becomes the new host of Ultraman Zero, Riku fights to defend the peace of Earth while figuring out just what it means to be an Ultraman.