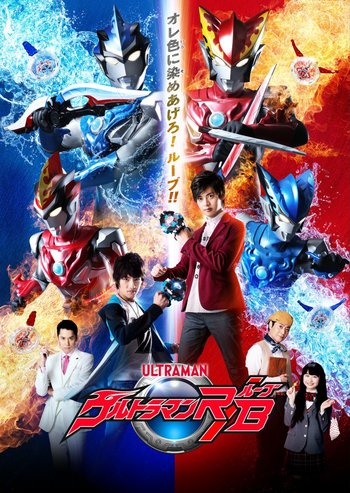 Color me with your power! R/B!
"This is the story of us, siblings. Starting out as Ultraman."
— The series' tagline
Advertisement:

Ultraman R/B is a 2018 tokusatsu series created by Tsuburaya Productions and the 30th entry in the Ultra Series, as well as the final entry of the Heisei generation of Ultra heroes due to Emperor Akihito (Emperor Heisei) stepping down as the incumbent Emperor of Japan to be replaced by his son, Prince Naruhito.

In a notable difference from previous series, rather than a single Ultra as the main protagonist (with the occasional Second Ultra who shows up later), it focuses on a pair of Ultra brothers, Ultraman Rosso and Ultraman Blu, and their human hosts Katsumi Minato and Isami Minato. Katsumi and Isami are two brothers (with Katsumi being the elder one) who live with their younger sister and their father who runs a specialty store. One day, during the sudden appearance of a giant monster, the brothers find the R/B Gyro, which grants Katsumi and Isami the power to become Ultraman Rosso and Blu respectively. Using the power of R/B Crystals that allow them to transform and change forms based on the elements and previous Ultra heroes, the brothers face their emotions with allies and enemies, grow up and confront powerful enemies, and realize the importance of those bonds that they take for granted.