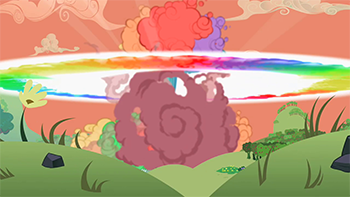 We'll meet again, don't know where, don't know when...
"That was the secret of secrets," said the Queen Jadis. "It had long been known to the great kings of our race that there was a word which, if spoken with the proper ceremonies, would destroy all living things except the one who spoke it."
— The Magician's Nephew
Advertisement:

In a fantasy setting featuring Fantasy Gun Control, Medieval Stasis, and assorted other reasons why the culture would never develop anything even close to nuclear weaponry, there may be some form of magic attack so powerful and destructive that it is obviously a stand-in for nuclear weapons. This goes double if it leaves behind some sort of corrupting effect that lingers long after the spell itself is cast, a la fallout. Compare to how Automatic Crossbows stand in for guns. Kamehame Hadoken, Wave-Motion Gun, and Person of Mass Destruction are common ways of invoking it. Everything Makes a Mushroom is the usual result.

Elsewhere, this trope is about the deliberate insertion of something nuke-like into a civilization that hasn't even invented the steam engine yet. That isn't to say this trope doesn't ever appear in higher-tech settings, where it will instead be some nuke-like weapon that nonetheless isn't nuclear. Like Fantastic Racism and Fantastic Drug, in that the situation is obviously designed to parallel a real-world situation, either in order to make some point about the issue or simply to allow all the connotations and associations of the real-world situation to easily be applied to the fantastic. In Japanese works, may be related to Nuclear Weapons Taboo.

A Fantastic Nuke may set off a World-Wrecking Wave or precipitate The End of the World as We Know It. It's frequently also an Unholy Nuke based on The Dark Arts. Furthermore, the use of such a weapon may result in Fantastic Fallout: long-lasting and often harmful effects on the land upon which it's used.

In some less subtle cases, there might even be some kind of reference to matter-energy conversion.

Finally, we should note that while it's not just nuclear weapons that create the infamous "mushroom clouds" (any sort of explosion or even rapid combustion can do this in still air; it's just that the more powerful the explosion is the larger the cloud will be, the longer it will last and the less sensitive it is to disruption by wind, so it's primarily associated with very large explosions such as nukes), if something in fiction is described or depicted doing so, it's a good bet the author/creator was attempting to invoke this trope, and it might qualify for Superweapon status.

Compare Climate Change Allegory, a metaphor for another existential threat to humanity.