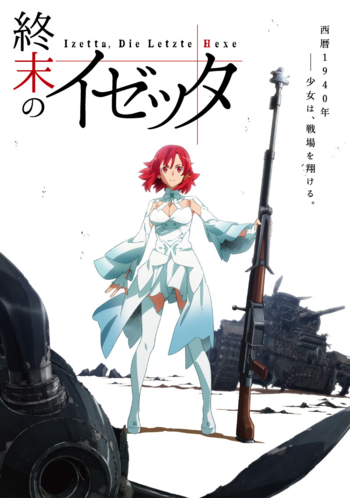 A.D. 1940. A maiden soars through the battlefield.
"If I am promised to the princess, then I will fight for her sake."
Advertisement:

In an Alternate Universe Europe of 1939, World War II begins as similarly as it did in real life, when the imperialistic nation of Germania invades its neighboring country of Livonia. Soon, the entire continent spirals into a gory symphony of industrialized violence and warfare, with no end in sight.

By the year 1940, the Germanian army set out to conquer the Principality of Eylstadt - a small monarchy with plenty of natural resources but without a strong military force. All signs point to the inevitable - that this country's destruction would become but a footnote in history. However, the principality's crown princess, Ortfiné Frederika von Eylstadt (Finé for short), doesn't want to let her realm go without a fight. She embarks on a quest to the neutral country of Westria to meet with an ambassador of the Britannian Empire and negotiate the terms of their aid. However, she is too late - the Germanian forces have already begun their invasion of Eylstadt, and their agents abduct the princess.

While being flown out to the capital of the Germanian Empire, Neu-Berlin, a mysterious force rocks the plane, allowing Finé to fight back, but she's quickly shot and disarmed. Just as she declares her last words in defiance against Germania, a coffin-like object that was on the plane bursts open, decimating the aircraft and scattering all its contents. That fearsome force is the red-haired Izetta, the last of the witches, and the princess' long-lost childhood friend. Izetta saves the princess at the last second, and together they fly into besieged Eylstadt. Thanks to her sorcery, Izetta makes quick work of an entire Germanian regiment in minutes. Now known as "The Second Coming of the Weisse Hexe", she has become a symbol of hope in a world where opposing the Germanian Empire was but a pipe dream. She demands but one thing for her services: Princess Finé herself.

But for all their good intentions, these powers came with restrictions and oaths for a reason. How many traitors and witch hunters will it take to break Izetta's will? How far will the Germanian Empire push Izetta before she loses control of something so indestructible and unrelenting?

Izetta: The Last Witch (Shuumatsu no Izetta, also known as Izetta, Die Letzte Hexe) is an original, 12-episode fantasy Anime series produced by studio Ajia-Do and Asahi Production. It premiered as part of the Fall 2016 Anime season on October 1st, 2016. It's available for simulcast and streaming on Crunchyroll here

. Funimation has released an English broadcast dub for this series, which began on October 19, 2016. Watch it here

"If I am promised to the princess, then I will trope for her sake."