Manga / Merman In My Tub 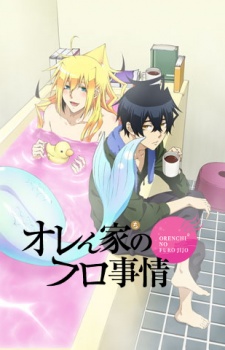 A Boy and His Cute Monster Boy.
Advertisement:

One day, high school boy Tatsumi is walking by a river when he notices a man lying motionless on the shore. Worried for him, he drags him back to the apartment where he lives by himself. But when he gets home, he realises with a shock that the man is actually a merman.

Said merman, a friendly if somewhat ditzy young Bishōnen named Wakasa, immediately takes up residence in Tatsumi's bath, declaring with delight that the water here is much cleaner and nicer than that in the river. Cool Tatsumi doesn't know how to think about any of this, but is willing to help out, even if his water bill ends up suffering considerably for it.

Merman in My Tub (Orenchi no Furo Jijou, literally, "The Circumstances in My Home's Bathtub" ) started out as a Yonkoma manga by Itokichi, which was serialized in Monthly Comic Gene from 2011 to 2020. It received a 13-Episode Anime adaptation by Asahi Production in October 2014. Each episode is a mere four minutes long, keeping it to the same comedic, Slice of Life story the 4koma had. Seven Seas Entertainment licensed the manga in English in 2015.

Orenchi no Furo Jijou shows examples of the following tropes: