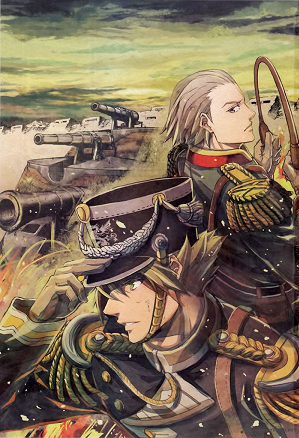 Gott mit unsnote "God with us", the motto of the German Empire
Nor steed nor mounted knight
Secure the towering height,
Where princes stand:
Love of the fatherland,
Love of the free man,
Founds the ruler's throne
Like crags at sea.
— Heil dir im Siegerkranz

, anthem of Prussia, sung to the same tune as "God Save the Queen"
Advertisement:

When Germany isn't shown as one massive Oktoberfest, or as the land of the Third Reich, chances are it will be the Theme Park Version of Imperial Germany (and Prussia in particular) during the late 19th century and World War I.

These Germans are likely to be dour, industrious types with a love of war, honour and tradition and a hatred of fun and games. Given that this version of Germany has definite Proud Warrior Race undertones, characters from the Kaiserreich will most likely be arrogant aristocrats spouting Gratuitous German (Or something that sounds like it. Or something that some people think sounds like it) and wearing Badass Longcoats. Dueling scars and monocles optional. What isn't optional, on the other hand, is the Pickelhaube, the classic World War I-era German army helmet topped by a nasty-looking steel spike.

Keeping in line with the late-19th century/World War I era atmosphere, great big black eagles and Iron Crosses will most likely be everywhere (though state symbols such as those of Bavaria and Saxony, strangely enough, will be absent), while the Kaiserreich's military will usually consist of vaguely WWI-ish technology, especially ugly box-shaped tanks (which all have individual names), U-Boats, Gas Mask Mooks, and, of course, zeppelins. Bonus points if there is some amount of confusion as to whether this is the Kaiserreich or the Those Wacky Nazis (especially if No Swastikas is in effect).

Not to be confused with Kaiserreich: Legacy of the Weltkrieg, a Hearts of Iron mod where the Kaiserreich wins World War I.