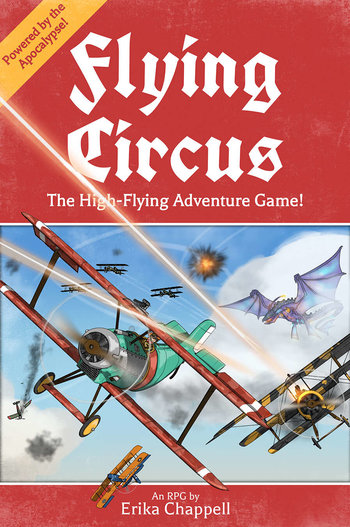 Flying Circus is a fantasy aviation Tabletop RPG game by Erika Chappell. It draws inspiration from the work of Hayao Miyazaki and is inspired by the Powered by the Apocalypse engine.

In this game, the players roleplay as pilots of a Flying Circus, a group of mercenaries using salvaged aircraft to complete missions. These Flying Circuses complete missions as they roam the land of Himmilgard, a continent recovering from a magical war of apocalyptic scale. Authentically dangerous air combat meets whimsical magic, and moments of action are interspersed with social interactions where pilots make and break Trust with each other with the turn of a wheel and (hopefully) forge heartfelt relationships together.

Mechanically, Flying Circus deploys a specialized ruleset for simulating air combat, while interplaying it with other game modes that cover everything from inter-group social dynamics to relieving stress in a small town to managing finances and equipment.

Flying Circus was funded through a Kickstarter campaign

that ran from March to April 2018, raising more than CA$ 37,000. Several expansions are planned as stretch goals, including historical playbook sets and alternative settings, including a Steampunk adventure game IN SPACE!. The first of these expansions. Flying Circus - Horrors of the Heights, came out on December 1st, 2020, and adds supplementary material for high-altitude and alpine gameplay.