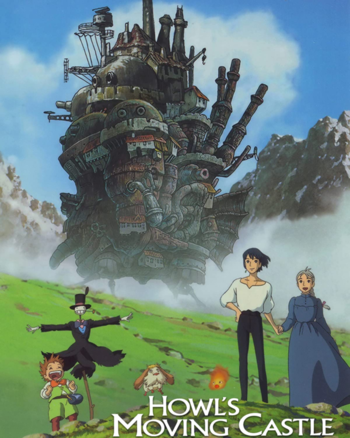 Howl's Moving Castle (ハウルの動く城 Hauru no Ugoku Shiro) is a 2004 Animated Adaptation of Diana Wynne Jones' novel Howl's Moving Castle. It was directed by Hayao Miyazaki and made at Studio Ghibli, which accounts for the many lovely visuals in the movie. Now, instead of a Medieval European Fantasy, the land of Ingary is a Steampunk/Gaslamp Fantasy world filled with both technology and magic.

The story starts roughly the same way as the book – During a fantasy equivalent version of World War I, a young woman by the name of Sophie (Chieko Baisho) works as a hatter and deals with massive insecurity problems. After an encounter with the wizard Howl (Takuya Kimura), she attracts the attention of the petty Witch of the Waste (Akihiro Miwa), who lays a curse on Sophie, abruptly making her physically 90 years old. Though rather accepting of her new age, which Sophie finds to fit her personality better, she still sets out to find Howl and break the spell. An animate scarecrow she calls "Turnip Head" leads her to Howl's eponymous castle, where she makes a deal with fire demon/Ifrit Calcifer (Tatsuya Gashuin) to break each other's curses under the guise of becoming Howl's cleaning lady. She also meets Howl's apprentice, a young boy named Markl (Ryunosuke Kamiki). Meanwhile, Howl is playing the role of a rogue wizard, doing his best to try and halt both sides of the raging war in the background, but the spells he's using in order to fight are bringing him closer and closer to losing his humanity.

During the making of the film, Hayao Miyazaki was very upset over the US invasion of Iraq, resulting in a strong anti-war message being added into the film. The main theme, however, remains the relationship between Howl and Sophie and how it mends the both of them – turning Sophie's insecurity into strength and Howl's aloofness into a desire to protect and love. Due to a great many details and several underlying storylines for minor characters, the movie can be a bit hard to follow at first – this very thing also allows for the audience to discover new things upon each repeat viewing.

It is also the final film to be produced by Ghibli before it broke off with Tokuma Shoten in March 2005.

The film focuses on both Sophie and Howl's romance as well as the war plaguing their nation. Unlike the original, which was an Affectionate Parody of fairy tales, the film is a straight-as-the-monster-crow-wizard-flies fairy tale itself.

The writer of the original book, Dianne Wynne Jones, was granted a private viewing of the movie by Miyazaki. She stated that she enjoyed it, and found it a very different (but complementary) experience from her book.

Jean Simmons provides the voice of elderly Sophie in the English dub.