Manga / In This Corner of the World 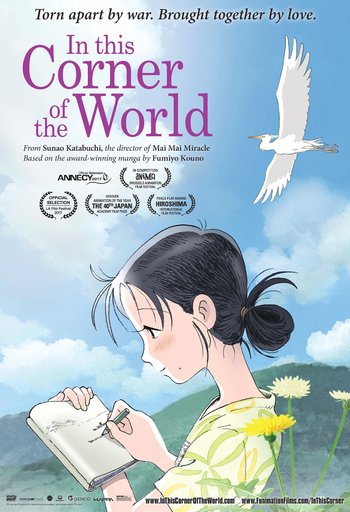 In This Corner of the World (この世界の片隅に, Kono Sekai no Katasumi ni) is a World War II drama manga written by Fumiyo Kouno, running from 2007 to 2009 in Weekly Manga Action. It later received a 2011 TV special Live-Action Adaptation and was made into an anime film in 2016, helmed by Sunao Katabuchi and produced by MAPPA. The 2016 film is famous for having been crowdfunded

and beating Your Name at the Japan Academy to get Best Animation of the Year. In America, Funimation and Shout! Factory have made an unique deal to become co-distributors of the film. A nine-episode live action television series aired from July to September 2018. An extended version of the 2016 film, titled In This Corner (and Other Corners) of the World, adapts more content from the manga and was released in December 2019; this version is notable for being the longest animated movie in the world, at 2 hours and 48 minutes.

Suzu Urano lives in the small Japanese town of Eba near Hiroshima, working for a family business that cultivates seaweed and pursuing her love of drawing in her spare time. One day in 1944, when she's 18, Shuusaku Houjou, a young man from the port city of Kure, comes seeking her hand in marriage. She accepts his proposal and moves to Kure to live with him and his family, where she quickly learns to adapt. As World War II continues to turn against Japan, however, food rationing and air raids begin, and tragedy strikes. All the while, the clock continues to tick down towards the atomic bombing of Hiroshima...

This manga contains examples of the following: