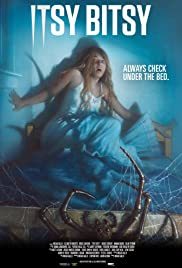 Always Check Under The Bed

Itsy Bitsy is a 2019 horror film directed by Micah Gallo and starring Bruce Davison, Elizabeth Roberts, Arman Darbo, and Chloe Perrin. It also features performances by Denise Crosby, Treva Etienne, Eileen Dietz, and Matty Cardarople. Kara (Roberts) is a nurse who moves her children Jesse (Darbo) and Cambria (Perrin) from New York to a house on the property of the ailing treasure hunter, Walter Clark (Davison). Walter is approached by former associate Ahkeeba (Etienne) who offers him the Black Egg of Maa-Kalaratri, the sacred artifact of a tribe who may have been involved in the death of Walter's wife, Maggie. When Ahkeeba is rebuffed, he smashes the egg in frustration, and is the first victim of the spider that emerges. Kara, on her part, is carrying a dark past involving a pain pill addiction, a car crash, and a child named Stevie, and Sheriff Jane (Crosby) is deeply suspicious.