Animation / The Legend of Hei 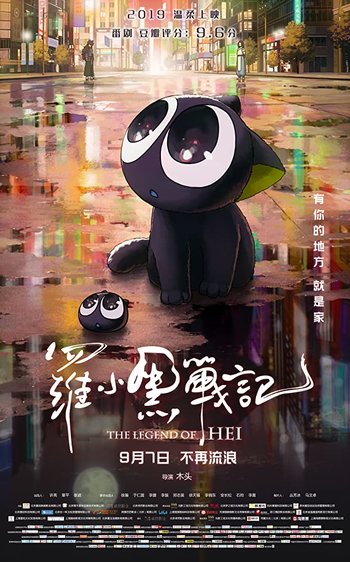 Luo Xiao Hei Zhan Ji (The Legend of Hei) is a Chinese animated film released in 2019 by the studio MTJJ, which serves as a prequel to the similarly named web animation series The Legend Of Luo Xiao Hei.
Advertisement:

The film follows the young cat demon Xiao Hei after his home is deforested by humans and he must find a new one. He runs into a group of other fey creatures led by the formidable Feng Xi, who have also lost their homes and take him under their wing with dreams of reconquering the land they say is rightfully theirs. However, they run into a human "Executor" known as Wuxian, who is tasked with defeating Feng Xi. Their tussle leads to Feng Xi and company having to abandon Xiao Hei and inadvertently leaving him at the mercy of Wuxian, stranded on an island. The two go on a journey back to the mainland, with Xiao Hei learning to control his abilities as well as forming his own thoughts on whether or not he's on the fey's side or the humans. Meanwhile, Feng Xi is not all he appears to be...

The movie received a Japanese dub distributed by Aniplex simultaneously with the Chinese version, and an English dub by Play Big and distributed by Shout! Media released in 2021.