While this page contains unmarked spoilers for the film, it also includes spoilers for Final Fantasy XV. You Have Been Warned! 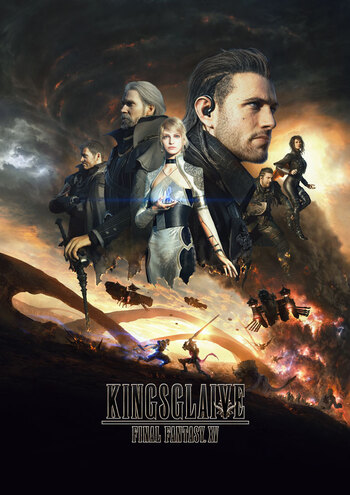 Kingsglaive: Final Fantasy XV is an anime prequel film to the 15th entry in the earth-shatteringly popular Final Fantasy series, directed by Takashi Nozue and released in 2016. Writing credits are by Takashi Hasegawa. Hajime Tabata and Shinji Hashimoto served as producers. Its score was composed by John R. Graham.

Its story takes place during the events of the game's first chapter, and focuses on the king of Lucis, Regis Lucis Caelum CXIII, Nyx Ulric of the titular elite guard and Lady Lunafreya Nox Fleuret of Tenebrae. The Kingsglaive share Regis's magic to defend the kingdom of Lucis and its crystal from the invading empire of Niflheim. Faced with detrimental conflict, Regis accepts a ceasefire with Niflheim: as part of this treaty, his son Noctis must marry Lunafreya, whose home Niflheim invaded 12 years earlier in hopes of assassinating the Lucian family. However, this is all part of Niflheim's Evil Plan to invade Insomnia and steal the Lucian Power Crystal for world domination.

Kingsglaive was made as a tie-in to the planned multimedia expansion of Final Fantasy XV, along with Brotherhood.