Anime / Final Fantasy: The Spirits Within 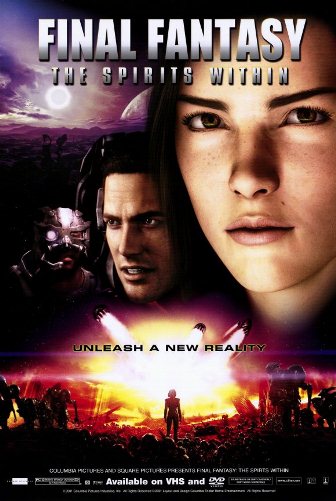 Final Fantasy: The Spirits Within is a 2001 computer-animated Science Fiction film directed by Hironobu Sakaguchi, the creator of the pimple-poppingly popular Final Fantasy series of role-playing games.

In the year 2065, an alien infestation has overrun Earth; the remaining humans live in "barrier cities" all over the world while trying to free their planet from the spectral alien beings ("Phantoms") that devastate everything in their path. Dr. Aki Ross, alongside her old mentor Dr. Sid, hopes to unlock the secret behind these Phantoms and find a way to destroy them without harming Earth — but General Hein has plans to annihilate the Phantoms using a huge space cannon, regardless of the damage it can do to the planet.

Although it bears the Final Fantasy title, this movie has close-to-zero connection to the video game franchise of the same name. The Spirits Within holds a place in film history as the first feature film to attempt photorealistic CGI characters.