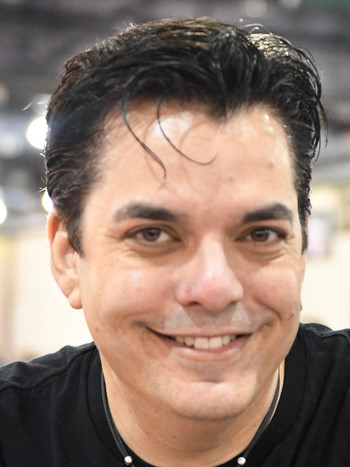 If you are seeing this page regarding Lex Lang, you are already dead.

Lex Lang (full name: Walter Alexis Lang, born November 12, 1965 in Hollywood, California) is one of the busiest voice actors today, being best known as the voice of Goemon in Lupin III. He also does ADR work and has trained voice actors for many media outlets. Besides anime, he does film, video games, Western Animation, and redubbing for content, and even movie trailers! He is also a part-time musician, being lead singer and guitarist of his band, LeXLang, an alongside voice actor Bentley Mitchum in a band named The Velvet Box. Lex has also started a recycling awareness program called the Love Planet Foundation.

He is married to fellow voice actress Sandy Fox, who plays with her husband in an acoustic group called Butterfly. A bit of trivia is that he once was a contestant

on Whammy back in 2002. His wife would later be on that show a year later. He initially started to decrease his presence from anime voice acting in 2009 outside of film ADR, due to his work as a humanitarian, but in 2015, he started returning doing anime voice work in Durarara!!x2. In addition, he also has done some ADR Direction for Bang Zoom! Entertainment.