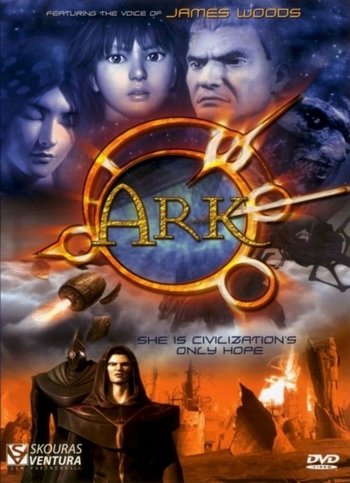 She is civilization's only hope.
Advertisement:

Described as an attempt to address the failures of Final Fantasy: The Spirits Within and redeem the use of photorealistic CGI in animated films, Ark strives for reaching a broader, much more westernized target audience, while keeping the film's plot close to it's Eastern RPG influences. Not striving for originality, the common elements - the protagonist being The Chosen One, a spunky Anti-Hero, the film being a Space Opera from a distant galaxy, a treacherous advisor who is the film's Hidden Villain, etc. are all here, but somehow this movie managed to entertain far more than it should.

Set in 2204 in a distant galaxy, the aftermath of a great war over the ownership of Planet Alcyeon between it's inhabitants, the Storrians and Ceveans, results in Alcyeon's once-lush surface being reduced to a wasteland. The Storrians, winners of the war, terraforms the planet's surface with technology and high-tech machinery, while the Ceveans are forced to flee into the wilderness. But in the thick of the war, a conspiracy is discovered, a powerful dictator intends to use an ancient superweapon for his own selfish reasons, and Alcyeon is facing impending destruction...

Much of the film is centered around Amarinth, the daughter of Commander Jallak of the Storrian army. When Amarinth befriends Rogan, a Cevean refugee who escaped Storrian authorities, an unlikely friendship happens between the both of them. Somehow, Amarinth herself is involved in a planet-destroying prophecy - specifically, she will be fated to stop it, and unbeknownst to Amarinth she is destined to be savior of both the Storrians and Ceveans.

"Alcyeon was once like this before the war... it's hard to imagine anything other than wastelands, but it doesn't matter. I know this will be a good home for us all. The Ceveans, the Storrians, we're learning to live together but it hasn't been easy so far. I just wish Amarinth were here to help us bridge the gap... we could learn so much from her, but we already have." — Rogan