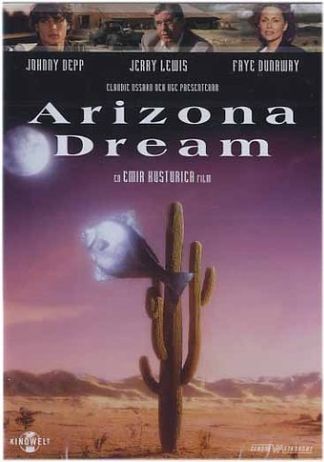 "If you believe in your dreams, you could be sure that any force, a tornado, a volcano or a typhoon, wouldn't be able to knock you out of love; because love exists on its own."
— Axel
Advertisement:

Arizona Dream is a one-of-a-kind surrealist, Magic Realism film which meanders between a love story and a spirit quest, directed by Emir Kusturica and released in 1993.

Axel (Johnny Depp) is a fish tagger in New York who would be content to spend his days communing with his fish, wanting for nothing. But his buddy Paul (Vincent Gallo) is determined to drag Axel away to Arizona to attend the wedding of Axel's uncle Leo (Jerry Lewis) to a young woman, Millie (Paulina Porizkova). There, Leo is intent to persuade Axel to work alongside him at his Arizona Cadillac dealership.

Axel finds himself sticking around when he meets Elaine (Faye Dunaway) and her daughter Grace (Lili Taylor), and enters a lopsided love affair with the former while dealing with distractions from the latter.